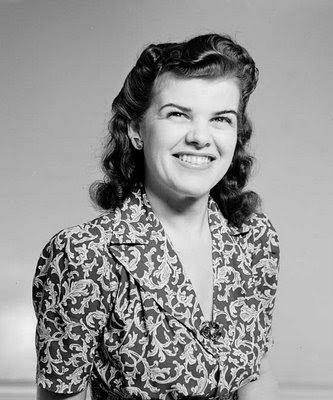 She was the wife of my mother's dear friend Dick from childhood. Somehow the two couples from New Jersey ended up living in the same apartment house in Queens. They were close friends, and when I was small we were in and out of each other's apartments. I adored Margie, and Dick, too. Eventually I'll come across a photo of the two of them, and I'll post it.

Margie was as warm and fun loving as she looks in this picture. She and Dick gave me a lot of attention. They were a big part of my life when I was little. Dick was my first piano teacher. Margie was a Type I diabetic, and the muscles in her arms had begun to atrophy. Every night, my prayers included, " . . . and make Margie's arms better." She and Dick weren't able to have the children they wanted, but eventually she and Dick bought a house in New Jersey and adopted two school-age sisters. Soon after, complications from Margie's diabetes made it impossible for her to care for them, and they had to give the girls back. It was a hard decision. Margie didn't live long after that. I believe Dick stayed in touch with the girls, though. I'll see if I can find out the rest of that story.

Here's a coincidence . . . except, as you know, I don't believe in coincidence. I was studying this picture of Margie the other day, and thinking how good it was to bring her to life in my memory after all these years, and how I would introduce her to my friends online. Later in the day I drove to a meeting, an audio book playing in my car stereo. In the story, a man drives up to a house and notes that it looks very much like the house where he grew up, in Closter, New Jersey. Closter, New Jersey? I thought. Where have I heard of Closter, New Jersey? Then I remembered: When Margie and Dick left Queens, they moved to Closter. I hadn't heard of it since.
Posted by Susan at 7:12 PM

These photos and stories are so beautiful, and sad...

Interesting! She looks a little like my mom did back then.

I'm really enjoying these photos and your stories about them. Thank you for introducing Margie to us.

My daughter likes to buy old photographs at antique stores -- it makes me sad to see photographs being sold like that though -- to people who didn't know, or aren't somehow connected to, the folks in the pictures. I love my boxes of old photos -- and need to get on with scanning them.

Photos in boxes or albums, never looked at, or worse, in antique shops, are so sad. I love that blogging lets us peak at your dad's photos.