Spring Comes to the Farm 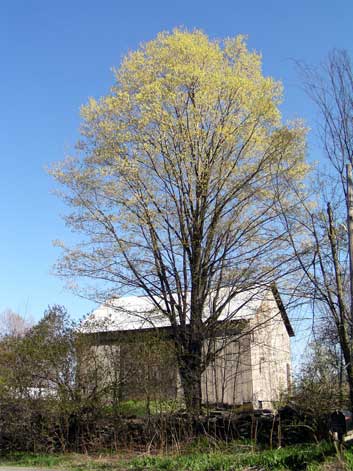 I used to wonder why so many old standards have lyrics waxing bittersweet about spring. I don't wonder anymore. Spring is beautiful, and almost always welcome, but it has a way of making one aware of what's been lost.

However, today I took my camera out in search of what I could find. My best find was a gathering of little plum trees that have sprung up in back of the two big ones. They were all in bloom together.

My worst find was the dreaded tent caterpillar. I don't think I've ever seen so many tents. They're all small because the season has just begun. The caterpillars are only about a quarter-inch long. But I'm sure they grow quickly! I took down as many as I could reach with a very long stick. It was frustrating to have to pass up so many up high. I'm usually very much against using chemicals, but in this case I wished I had a can of bug spray with a 20-foot reach.
Posted by Susan at 6:35 PM 3 comments:

HCL: Thanks for the memories.

When I was growing up, I especially wanted a brother. I imagined how much my father would have enjoyed having a son, and I pictured all the things the three of us could do together.

My dad would have loved every minute of it. At least I think so. But I have to wonder about those childhood daydreams of mine, the ones where Dad and Bro and I do everything together. Would my fantasy of “The Three Musketeers” have played more like “Two Musketeers and the Nuisance”?

For instance, if my father had had a son, would he have spent all that time teaching his daughter how to throw a ball? Thanks to those lessons, I had a grand time in high school impressing the guys with my football passes and fastballs. Today it is PC to refer to it as throwing properly; back then I threw “like a boy.”

With a brother in the family, would Daddy have taken someone else to the Yankee games? To the shooting range? Would he have taught someone else to drive his big custom standard-shift Pontiac with the truck clutch? Would I still have learned about f-stops and apertures and close-up lenses and making our own enlargements? Would I still be able to look back on those happy hours spent beating my father at bowling and losing to him at cards, always—at his insistence—playing for money?

And what about fishing? My dad taught me to fish on Noyack Bay, near Sag Harbor. Our version of the sport didn’t require the sort of technique or equipment you encounter in fresh water or deep sea. We fished from a rented dory whose enclosed bow gave it only the vaguest resemblance to the speedboats I lusted after, but it was enough to satisfy me. The boat was powered by the 7.5 HP Evinrude motor that accompanied us on every vacation.

Our equipment consisted of big rods, big reels, heavy line, and big sinkers. For bait, we carried a bucket of little fish we called killies. The procedure went like this: The baited hook was dropped in the water, where it quickly settled (thanks to the big sinker). Then we’d reel in just enough to get it off the bottom. At this point we might discover that we had hooked a log or other undesirable. But unlike all my later experiences losing lures in fresh waters, this snag was only that—a snag. When you have big rods, big reels, and heavy line, you just…reel it all in.

Assuming our killie was swimming free—or as free as one can swim attached to a hook (bear in mind that this was long before I became an animal rights activist)—we sat and waited for some excitement to happen. Looking back, fishing with my dad had an element of zoology education. Much of what we caught was not edible, but it was always interesting.

Daddy showed me how to tickle blowfish to make them inflate. I learned the meaning of the phrase “slippery as an eel” firsthand. Literally. We enjoyed fascinating close encounters with sand sharks, from harmless ten-inch specimens to a three-footer that sent the occupants of the dory scurrying to both ends. And I discovered that the glassy, seductive waters of Long Island had a secret core that was—even then—contaminated with shoes, tires, and car parts.

When my father said, “Let’s go!” I hit the boat in seven strides: four on the path, two on the dock, one on the deck. Would a brother have bumped me into the water in mid-stride? Would I have spent my time in the dory (assuming I got there at all) dispensing sandwiches and soda to the convivial fishermen?

I would hate to have missed one bit of it, including crabbing in the Shinnecock Canal. If I had had a brother would my father have let me toss out the maggoty fish heads and slowly pull in the great blue-claws? Would we still have dug for clams with our bare hands? Or would my fun at the shore have consisted of shell-gathering and building sand castles?

And those long, lighthearted games of ball we played against the back steps of Cousin Peggy’s Victorian house in Massachusetts every spring… Would it have been my brother out there laughing (and losing his shirt) with our dad, while I stayed inside and embroidered?

With a son at my father’s side, would I have been doomed to a childhood of cross-stitches and piano recitals and frilly pink dresses?

Maybe I wouldn’t have made such a great sister after all.