Their wedding set the standard for all weddings to come—and all the weddings that came paled in comparison. It was big, it was elegant, it was happy. It was fun!

I remember the dancing (I danced a lot), I remember the food, and I remember my cousin Barry taking me for a ride in his European sports car. My dad took lots of pictures. He drove home in not the best condition to be driving anywhere. But this was before MADD, at a time when no one talked about drunk driving, or seemed to think about it much. And I was too young to drink, and too young to drive.

Fifty years later, I attended the 50th anniversary of the wedding. This time a DJ provided the music, not two bands. My cousin Larry wasn't there, and his sports car undoubtedly turned to rust a long time ago. My favorite dance partner from the wedding, my cousin Jennie's husband, died young. The Best Man is gone now, too. This time I didn't dance at all.

But the country-club setting was gorgeous, and among the 100 guests were many members of the wedding party. The food was Lucullan. I took lots of pictures. On my completely sober drive home, the GPS (borrowed from my son) steered me into a parking lot.

With all their friends and relatives surrounding them, the bride and groom danced with their granddaughters and with each other. Everyone was happy.

What Boomers Talk About, Part II

My dear friend Lisa and I had one of our marathon phone calls the other day, and one of the things we talked about was the delusions of our youth—specifically when we were young mothers. "My children will always be well-behaved," we said back then. We also said, "My children will never fight with their siblings" and "My children will sail through their teenage years without a problem."

This ranks right up there with "I'll never get arthritis."
Posted by Susan at 6:37 AM 1 comment:

What Boomers Talk About

The drummer at the jazz club was giving me directions to his next gig, and we started talking about a couple of cemeteries that were on the way. The bass player came by and asked if we were discussing a local restaurant. I said, "No, we're talking about cemeteries. It's the next topic of conversation after we finish talking about our colons."
Posted by Susan at 8:43 PM 1 comment:

So Big I Measured It 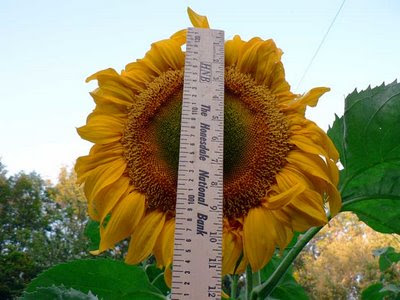 It was like this everywhere I went. Of course, I didn't go very far. These two pictures were taken 17 miles apart.

But it looks like fall, doesn't it? Nevertheless, I hope our fall is late and our spring early.
Posted by Susan at 11:55 AM 5 comments:

Okay, first I'll confess that I bought a fur coat for myself once. I was 23 or 24, and I bought the coat at Saks Fifth Avenue or Bonwit Teller, I forget which. It wasn't mink; it was rabbit. But rabbit in a beautiful design, made in Greece. My in-laws were horrified that I had chosen such a lowly fur, and called from Bermuda to say so. But I loved it. I felt gorgeous and glamorous in it.

A few years later we had a country house and I learned about animal rights and animal activism. I could no longer bring myelf to wear fur. I had what I now know was the dumb idea of donating the coat to the local Humane Society for fundraising. The president of the Humane Society bought it for $20. Great.

In 1985 my mother-in-law died. She left her two newer fur coats to her daughter, and I inherited her mink. It was blonde mink and very lush. I wore it once. I had made plans with a British friend to attend a Christmas Eve caroling church service together, and when she showed up in a fur coat I thought, what the hell, and put on Mom's. I must say the two of us looked very prosperous.

After that I lost track of the coat. We hung it somewhere for safe keeping, but over the years I forgot where that was. I never thought about it, so it didn't matter. Just recently a friend spoke about the mink coat she inherited from her mother. I said, "I have my mother-in-law's, but I have no idea where it is."

Then this week my son decided to clean out an area of the barn we once used for storage. It hadn't received any attention in some time, and had sustained rodent damage. There was also way too much moisture in that room, my son said. "Some of the stuff was really gross," he told me, "and the worst was the coat." The coat? What coat? "A fur coat," he said, "covered with mold." He'd put it directly in the trash.

It's hard to imagine moldy mink. But it's also hard to imagine innocent animals being clubbed to death so women can look prosperous. One might think the image of Mom's coat thick with mold would make me feel sad for her. But if Mom is where I think she is—in a place where she now knows everything—she's planning to buy polar fleece in her next life.
Posted by Susan at 5:40 AM 3 comments:

I spoke with the second vet, the one who thought the first vet's diagnosis was wrong. She got the results of Princeton's blood work (read by a pathologist), and apparently the first vet was right. Princeton had lymphoma, in this case a cancer of the bone marrow, and he would have died of it no matter what medicines we did or didn't give him. So I guess I can stop wishing I'd done some other things differently, and envision him as Suzanne described to me: in happy kitty heaven right now, back to his old prince tony self.
Posted by Susan at 4:26 AM 2 comments:

In 1996 I was in my parents' house on Princeton Road in Florida, taking apart their household after they died, when my daughter Gillian called to say she had found the perfect cat for me. One might say I didn't need a cat, since we already had quite a few. But Mystic, the lovely longhaired black & white cat I had nursed back to health after finding her, desperately ill, hiding in an abandoned washing machine, had drowned in our swimming pool a couple of years earlier, and Jill knew how traumatic that event had been for me. She decided I needed another longhaired cat in my life.

He was one of many kittens born in a horse barn where Jill took riding lessons. My daughter Suzanne drove up and got him, which must have taken some effort because he was fearful in the way of all feral kittens and not at all used to humans. He spent his first two weeks at home in my room, getting used to me. It forged a bond that will never be broken.

We called him Prince Tony as well as Princeton, and he answered to both. If I encountered him unexpectedly I'd say, "Prince Tony! My baby!" and he always responded with one of his original sounds. Princeton could be a handful, but when Jill heard me greet him that way she knew I was happy that she had brought us together.

The picture on top was taken recently, after he had lost a lot of weight and wasn't feeling well. The second photo is from his youth. He was a big cat with a magnificent coat. He was quite vocal, and would usually speak when spoken to. In recent months he would call my name (at least that's what I think he said) several times a night. I would rouse myself from sleep just enough to raise my hand, and he would put his face into it. I would pet his head, and then he'd go back to sleep.

This spring, when he was 12, he became very sick. The vet thought he had non-viral leukemia, and treated him for that. He got better with antibiotics and worse (I think) with prednisone. Last week another vet offered a different diagnosis: acute massive infection. She sent his blood to a pathologist, and I'll find out on Monday if they learned anything from it. She also ordered a strong antibiotic from a compounding pharmacy, but it didn't get here when we thought it would, and by this morning it was all too late.

He went through so much, and I wish I could take it all back because in the end it did nothing for him. If I had a second chance, I would handle his illness differently. But we rarely get second chances. I saw Jill's car twice on the way home from the vet's this morning—same model, same color, not so common anymore—and took it as a sign, though not a very dramatic one, that he was with her now. In any case, I know he is. I just wish he were with me. Prince Tony. My baby.
Posted by Susan at 10:34 AM 6 comments: 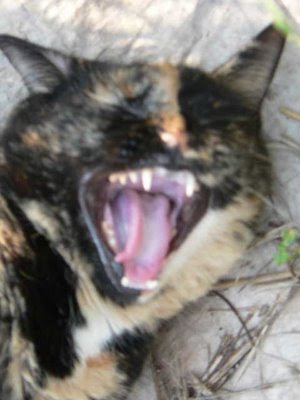 Yeah, I know it's out of focus. Way out of focus. But you see, Annie was at my feet in the garden, lying on wonderful weed-suppressing cardboard, when she looked up at me. And I looked down at her. And then she yawned. No time to focus.

Maybe this is a picture only a veterinary dentist would love. Or Annie's mother.
Posted by Susan at 12:56 PM 2 comments:

House Wrens nested in this pottery birdhouse for years and years. Then they disappeared about ten years ago, and I put the birdhouse away. I happened upon it this spring and impulsively hung it back up. Within days, I heard the familiar (and wonderful) trill of a House Wren. So loud for such a small bird! Surely these were not the same ones who nested hear all those years ago. But something about this birdhouse obviously appeals to House Wrens.

The other day a papa (or mama) Wren sat in the Blue Spruce scolded me (over and over) for sitting on the porch and interrupting his mission: to feed the babies. I did get up and leave, but not before taking one more picture.
Posted by Susan at 1:34 PM 6 comments: