Thanks for the Push. 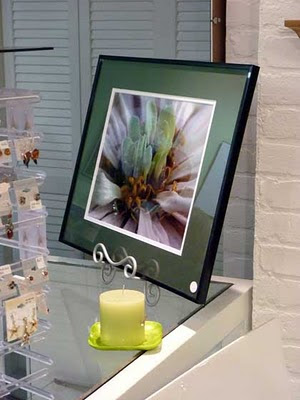 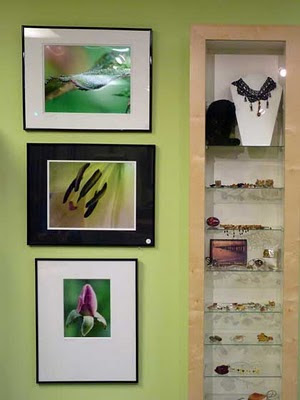 I went through my blog the other day, reading over many of the old posts, and found a number of comments urging me to exhibit my photos. Thanks to your encouragement, and that of other friends, I began showing my camera work last year, doing two exhibits. This year I've had three. The one running now opened on Friday, and we had a great time at the reception.

The show is at a beautiful shop selling amber jewelry from Poland (and online, too), by the way.

Oh, and check out the way they hung the oil-on-water pictures (and Lizzie's eye)!

My sincere thanks to those who urged me to "put it out there." (In a manner of speaking.)
Posted by Susan at 8:01 PM 15 comments:

The Elopers Have Been Partying!!

The bride's family threw a party (I guess we can call it a wedding reception) Saturday night for the beautiful couple who dared to elope in August. It was a wonderful gathering—and now I can officially think of my son as a Married Man. (Yikes!)
Posted by Susan at 7:44 PM 5 comments:

Annie has been organizing!

This is Annie. It hasn't been easy persuading her and her son Pogo to be indoors full-time (after all, they started out in my neighbor's barn), but we've been doing pretty well since spring.

Maybe Annie's been a little bored in the house. Or perhaps she has strong organizational instincts. But whatever the reason, she has been on a mission that good housekeepers (and others, like me) can appreciate. She has searched the house for Wolfy's leftover dog toys and carted them one by one upstairs, depositing them outside my bedroom door. Wolfy was a big dog, and some of these toys seem awfully heavy and/or awkward for a small cat, but Annie managed somehow. Then a few days later she gathered up all the cat toys and set them together just inside the front door.

With her mission accomplished, I figured she could use something new to occupy her, so yesterday I bought one of those laser lights for cats ($4 at Walmart). What a big success!! I can see both my cats are going to be well exercised (for a change).

Now if only someone could interest me in running back and forth and around in circles after a laser light.....
Posted by Susan at 12:03 PM 5 comments:

If that title means anything at all to you, you've played cribbage. My dad was taught to play cribbage by a hospital roommate many decades ago, and that was the start of countless games between the two of us. We loved our cribbage games so much that one year I bought him a giant cribbage board, four feet long. Because he lived in Florida, mud-daubing wasps filled up all the holes. But I cleaned them out, and I still have the board somewhere. I should find it and hang it up.

This week I discovered online cribbage, playing against the computer. Believe me, it is not as much fun as playing with Harry. But I was surprised at how quickly the game came back to me, considering it's probably been close to 20 years since I've played. And I learned something else. There's a certain lingo attached to cribbage, and after I played a few rounds with the computer I began to remember it. It felt good to speak it aloud.

I don't know why cards are so much fun. How we found hilarity in sitting at a table staring at them and adding up points, I have no idea. But we did. The banter was fast and funny, our laughter frequent.

My dad loved playing cards. If we had a group, we played knock rummy. If it was just the two of us, we played cribbage, honeymoon bridge, or some variation on rummy. And you had to play for money with my father. Not a lot of money, but some coins had to exchange hands at the end of the evening. Said coins usually ended up in his hand.

My daughter Jill was the only one of my kids to inherit the card gene. She and I played several different games, but it is our hilarious double-solitaire battles I remember best. No money was involved, but you'd think we were playing for megabucks the way our hands slammed those cards down to beat the other to the center. Like her grandfather, she usually beat me.

Playing against a computer really can't compare. No matter how many qualities one tries to attribute to one's opponent, it's just a hunk of metal. And the charming British accent of the recorded scorekeeper fails to save the experience from being so quiet. Maybe this is why I find myself saying out loud all those expressions my dad taught me so long ago.