Piles of Music, Piles of Clothes

I'm doing one of my periodic purges of my CD collection. Whispering my decluttering mantra, ruthless, I'm going through stacks of them, pulling the ones I'm unlikely to want to play again. It's hard to know if I'm right or wrong about that, since I enjoy so many kinds of music. But things seem to go in cycles. I'm keeping a few collections of arias, but I don't envision a return to Italian opera filling my car on long rides. I'm still a big fan of cabaret singing, but a couple of Nancy La Motts and Jane Monheits are enough.

On the other hand, I can never get enough of Diana Krall, Bonnie Raitt, that large and lovely genre known as late-night jazz, and duos like Eric Clapton and B.B. King. Or, for that matter, Diane Schuur and B.B. King. (Do you suppose Leonard Cohen and B.B. King will ever record together?) I'm keeping all my driving music: classic rock, Lucinda Williams, Latin jazz. I'll never discard anything by Mahler  Prokofiev, or Mozart (within reason), or anything sung by Dietrich Fischer-Dieskau. I would have added Kiri Te Kanawa, but I did get rid of a couple of CDs of her French art songs. I don't think I like French art songs sung by anybody.

Why did I think I'd like jazz standards sung by Metropolitan Opera stars? I kept buying, thinking the next one would be great. But it wasn't, so they're going. Going where? Good question. Not so long ago, I could count on selling my discards on Amazon or eBay. But people aren't buying CDs like they used to, which is no surprise, and most are selling for peanuts on these sites. So I'm donating my rather large discard pile. Some will go to the library, and some to a thrift shop that benefits the animal shelter.

The biggest pile of all, of course, is the pile of CDs I might or might not ever play again. I'm not inspired to pop any of them in the CD player, but I like them too much to let them go. Alanis Morissette is in this pile. So is Sarah Brightman. Now there's a potential duet pair....

This iffy category is where most of my clothes fall into. Or, more accurately, a version of that category. The clothes come with different issues. Fat/thin issues. ("If I lose 12 pounds I can wear these jeans again.") Gift issues. ("My daughter gave me this sweater, so I'm not getting rid of it.") More fat/thin issues. ("These jeans are too loose, but they'll come in handy if I'm having a fat day.") Lost-and-found issues. ("Oh, wow—I didn't know this box of winter clothes was in the attic. I haven't seen them for at least three years. Now that I've found them, I'm sure I'll start wearing them again next winter.")

I can whisper ruthless till the cows come home, and I'll still end up with more unwearable clothes than any sane person should have. But at least my CD collection is somewhat contained. More or less.

My father was a wonderful dad--playful, affectionate, and always ready with good advice. Just what a motherless child needed. But most of that advice had little to do with safety. My safety-conscious husband had critical things to say (to me) about the chances I took as a child and teenager. I disliked hearing criticism of my dad, but even I had to admit a fatherly chat about drinking and driving would have been a good idea, especially when Dad and I were strolling the streets of Queens, trying to find where I had parked my car the night before.

So when it came to raising my own children, I was happy to following guidelines set forth by my cautious husband. Did I say "guidelines"? Silly me. He set forth specific rules:

The car doesn't move until all seat belts are fastened.

Smoke alarms will be installed at all critical points (even though we were smoke-alarm innovators, and each unit cost $110 at the time).

When the children are in water of any kind, we do not take our eyes off them ever, even for a second.

In the summer of 1978 my daughters and I spent an afternoon at Prompton Dam with Nora, my best friend at the time. Suzanne was 4 and Gillian was 2, and I was pregnant with their brother. Nora and I sat on a bench while the girls waded in waist-deep water. Nora and I chatted, and I watched my daughters.

Suzanne and Jill started walking slowly toward the shore, and as I watched, Jill disappeared. She had stepped in a deep hole, and she just sank—quicker than I can type this. And I'm a fast typist.

I jumped up without a word and ran, fully clothed, into the water, grabbing Jill and pulling her to the surface. I've thought often since then about the precious minutes that would have been lost had I not followed my husband's rule of never taking my eyes off a child in the water, even for a second. I imagine I'd be talking with Nora, looking at her, looking back at the girls, back and forth, until I looked at the girls and saw only one of them. I would have scanned the swimming area, thinking Jill had wandered off. I'm sure Suzanne would have alerted me to what had happened, but how long would that have taken? How long would Jill have been under water?

I thought about this today, all these years later, while listening to the noon news. It was reported that a 2-year-old girl drowned yesterday in an inflatable pool. I'm sure she had parents who loved her. But they took their eyes off her while she was in the water. They didn't know about my husband's rule. And that's why I'm here to tell you. 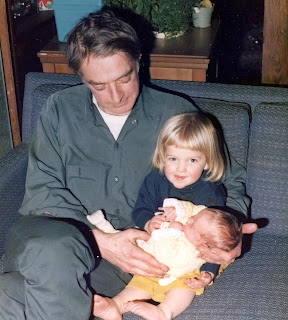