'Tis the season to be outside with my camera every day, several times a day, starting after I walk the dogs in the morning, before the dew disappears. Love those photo ops of summer!!
Posted by Susan at 4:37 PM 3 comments: 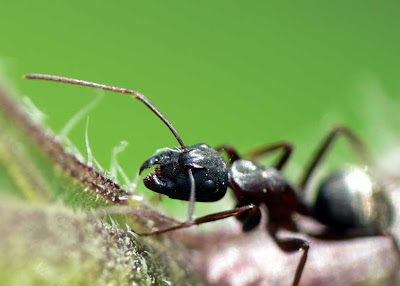 Who knew they looked like Darth Vader? And what's with the dent in his back?? (Click for a closer look.)
Posted by Susan at 6:12 PM 6 comments: 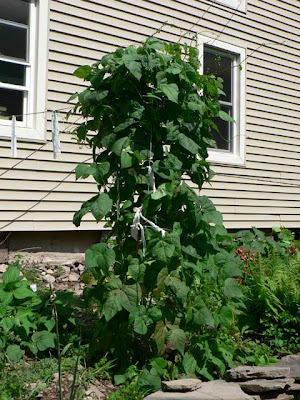 If you're old enough to know who Rube Goldberg was, when you see this picture you'll know why I used his name.

This year I planted a few vegetables on a dirt terrace along the side of my house. I chose it because it's off the deer's beaten path. When I said I wanted to grow Kentucky Wonder pole beans, my son offered to put up poles and fencing. But it turned out there wasn't enough room for poles and fencing plus squash plants.

So I devised the . . . um . . . interesting setup seen here. I hammered a piece of rebar into the ground and tied a circular tomato cage to it. Then I partially nested another cage into the first and tied that one down as well (using strips of cloth). Because the cages weren't close enough to the ground to snag the young plants, I tied on lengths of string so that they would hang down.

This caused some major head-shaking among people who saw it, but the beans climbed the string, and then the cages. All was well until last week, when a t-storm caused the beans and their support to pivot and list to starboard. I counteracted this by running string from the beans into my kitchen, going through the window and tying it to an iron pipe. That resulted in perfectly straight beans until yesterday morning, when I found that another t-storm had moved them once again. The string to the kitchen was now slack because they were listing to port.

So I ran another string out to my son's ham radio tower. I'll tell him to think of my green sisal as guy wires. To prevent us from walking into them at neck level, I hung strips of cloth. Contrary to what you might think, these white strips are not an attempt on my part to surrender to the beans.
Posted by Susan at 4:50 AM 2 comments:

The Not-So-Fine Art of Texting

I hadn't texted in a while, but when my granddaughter sent me a message a few months ago I figured I knew how to reply. It's like riding a bicycle, right?

Not exactly. Imagine learning how to ride a bicycle and then trying to apply those skills to a Harley-Davidson Fat Boy. What I didn't know was that my new cell phone had T9 text messaging. For those who don't know (and I still barely know it myself), T9 anticipates what you want to say and says it without requiring a lot of keying on your part. People under 18 love it. People between 18 and 25 probably love it, too. Some people between the ages of 25 and 45 probably think it's pretty cool at least some of the time. And then there are the rest of us.

Anyway, my granddaughter texted me to ask when I was going to pick her up. I don't remember the exact wording of my intended answer, but I do remember that it came out Demo nonononono. I thought I'd screwed it up, so I erased it and tried again. This time was worse: nnnon dfkawe lelamslelfn nonon. I know when to quit, so I hit send.

A minute later came my granddaughter's reply: You really need to work on this, Grammy.

I pretty much forgot about texting until today, when I received another message from my granddaughter: Is it hot out today? Let's see if you've improved any.

Still completely clueless about T9 (and any number of other things), I sat in my car in the Staples parking lot with the intention of slowly and carefully composing a reply. What I ended up with was Bacon cab cannon? It even put the question mark in for me. I sent it, and then I rolled up the window and laughed myself silly.

My 17-year-old texter par excellance wasted no time replying: Awesome! Just as I thought. Hahahahahah I love you.
Posted by Susan at 8:23 PM 4 comments: 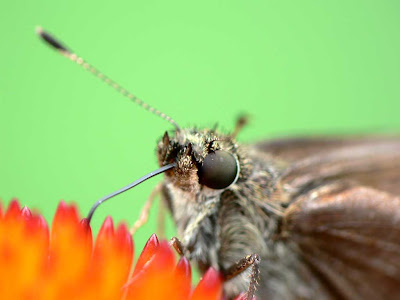 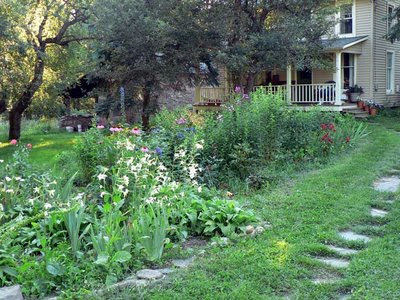 Craigslist Shoppers Must Be a Sickly Bunch

Yes, Craigslist shoppers must indeed be in frail health.

The latest indication came when I listed a grain mill for sale for the second time. A woman emailed, saying she was interested in it and giving the name of her town. I emailed back, saying I would be driving through her town in a couple of days. No response. A couple of days later I emailed again: I'll be coming through your town around 7:00 p.m. Are you still interested in the grain mill? No response. This morning I received a brief emailed apology, saying she was sick.

The first time I listed the grain mill, another woman was strongly interested in buying it, but she, too, dropped out of email sight for a while, and then reappeared to say she was sick.

The man who wanted to meet me in another town to buy my lab glassware was unable to do it after all because he came down with something.

And then there was the couple who wanted directions to the property I was selling. They never showed up, but I found out later that they'd gotten sick together.

I picture these people reclining on their chaise longues, pale faced, weak, longing to mingle in the world of people who walk around and buy things. Kind of like Mimi in La Boheme. With a laptop.
Posted by Susan at 9:25 AM 41 comments:

When I heard this on the news I was appalled. Healthy children, even overweight children with high cholesterol, do not have heart attacks. Why give them drugs in childhood to prevent something that the children themselves can prevent when they grow up? And their parents, rather than administering pills like mindless characters in a sci-fi book, should give their children a healthy lifestyle from the start.

Like every other drug out there, statins are not without side effects. I know several people (adults in their 50s and 60s) who had to come off them. They hope the damage done to their livers and muscles wasn't permanent. Damage done to a young, developing body would add a whole new level of worry.

Both sides of my family have a strong history of diabetes and fatal heart attacks. I watched my dad give up smoking and change his diet, reversing the heart disease that crippled him in his forties, and live to be ninety. I have to be strict about my own diet. I would never permit my child to be medicated in this way. Nor would I be crazy about the idea of having my two-year-olds tested.

We are an over-medicated, over-diagnosed society. Sadly, a large segment of the population seems to be content with this situation.

From the New York Times, here's what I'm talking about:

AMERICAN pediatricians are recommending wider cholesterol screening for children and more aggressive use of cholesterol-lowering drugs, starting as early as the age of eight, in hopes of preventing adult heart problems.

New guidelines issued yesterday by the American Academy of Pediatrics also call for children to be given low-fat milk after 12 months of age. The recommendations are certain to fuel a continuing debate about the use of prescription drugs in children and about the best approaches to ward off heart disease in adults.

But proponents say evidence is growing that the first signs of heart disease show up in childhood, and with 30% of US children overweight or obese, many doctors fear a rash of early-onset heart attacks and diabetes.

The academy estimates that 30 to 60% of children with high cholesterol are being missed under screening guidelines. For some children, cholesterol-lowering drugs, called statins, may be their best hope of lowering their risk of early heart attack, proponents say.

"We are in an epidemic," said Dr Jatinder Bhatia, a member of the academy's nutrition committee, which is making the recommendation, and professor and chief of neonatology at the Medical College of Georgia in Augusta. "The risk of giving statins at a lower age is less than the benefit."

Dr Bhatia said that while there is not "a whole lot" of data, research shows cholesterol-lowering drugs are safe for children. Surprisingly, the paper in the journal Pediatrics that explains the guidelines notes that average total cholesterol levels in children, as well as LDL and HDL cholesterol, have remained stable, while triglyceride levels have dropped, based on data from 1988 to 2000.

The recommendations call for cholesterol screening of children and adolescents, starting as early as two and no later than 10, if they come from families with a history of high cholesterol or heart attacks before the age of 55 for men and 65 for women.
Posted by Susan at 5:16 AM 2 comments:

I was mistaken . . . we didn't get in the car at 6:00 a.m. to go to the hamfest. We set out at 5:15. I set the alarm for 4:00 and got up on time, but I still didn't have everything done by 5:15. The important stuff was finished, though: The sandwiches were packed and the directions were printed out.

We lucked out on the weather. Just sunny skies; none of the rain that was forecast. My son sold some stuff and bought some stuff, all ham related. In my trip around the grounds I found a pair of needle-hosed pliers ($3), a pair of olive drab Army issue wool mittens with a trigger grip ($1), and a wonderful multi-level piece of play equipment for cats—just perfect for J & L's two new kittens. The guy was asking $8 for it, but I got it for $6. I brought it back to our tailgate, where two people (including a three-year-old boy) tried to buy it from us. I hope Oscar and Emmy like it as well as humans seem to.

My son also bought me an adjustable wrench. And I was this close to buying (for $1) a VHS edition of "Hillary and Jackie." Fortunately, I remembered in time that I own the DVD. Surprising what you can find at a hamfest.
Posted by Susan at 3:32 PM 3 comments:

It may sound like a midwest pork event, but a hamfest has nothing to do with food. Hamfests are big (sometimes giant) flea markets for ham radio operators. As you can see by the photo above (taken this weekend in a tent), my son is a ham. I am his devoted companion on our annual treks to the hamfests. We have two to attend in July, and I'm really looking forward to them even though it means getting in the car at 6:00 a.m.

It's also a lot of fun, even for people like me who don't understand a word of the science behind amateur radio. Invariably, a few tables will be set up with items designed to attract spouses (or loyal mothers): usually used books and DVDs. I've also bought some interesting little tools at hamfests, and one of my all-time favorite flashlights.

I should also mention that hamfests are my excuse to eat bread. The food served at these events is usually not anything I'd want to eat, so I pack our own: egg salad sandwiches, sliced chicken sandwiches with mayo and southwestern mustard, red grapes.

Ah, bread. Just for hamfest day, I will not think about carbs and the scale. Is it any wonder I look forward to it?
Posted by Susan at 7:18 AM 11 comments: