Bright Fly (or whatever it's called) 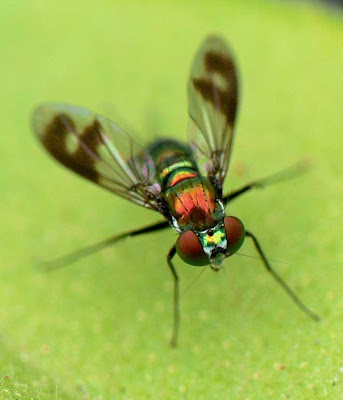 I don't know their name, but they're no more than a quarter-inch long, and rather metallic looking. They land lightly on plants, and take off the same way. Awesome little body, yes? Love the colors!
Posted by Susan at 9:17 PM 4 comments:

(See below for pictures of Angel and Wolfy.)

After Jill died, I told her dog, Wolfy, the Husky-Shepherd she called her soulmate, that he wasn't permitted to go. I told him this many times. "Wanna snuggle?" I'd ask, using his favorite word. This suggestion would send him flying to the sofa to fling his 70 pounds on me. And in a little while, my fingers buried in his soft, thick fur, I'd remind him, "You're not allowed to die."

Wolfy evidently took my order to heart. He's 14 now, and his fur is still thick and soft. But arthritis, despite the two meds he takes (one ridiculously expensive), prevents him from flying to the sofa these days, or even gingerly clambering upon it. And since my arthritis prevents me from sitting on the floor, Wolfy isn't getting much snuggle time.

Wolfy is also on an anti-depressant. I'm one of those people who thinks the world (or at least the U.S.) is way over-medicated. But when your dog shows every sign of sadness and anxiety, and you can't lie down with him anymore, what do you do? Amitriptyline is what I did. But after more than a month, I can't see that it's done any good.

I get home from work at 10:00 p.m., give the dogs their pills, and feed them. Sometimes Wolfy won't eat, but usually he does. Then, as I start winding down, he gets anxious. He pants and follows me. When I head upstairs to bed after midnight, he pushes his nose into the door opening. Stairs are an impossibility for him now, and he knows that. But he doesn't want to let me go.

I look at the clock when I turn out my light, because I know it'll be less than ten minutes before I turn it back on again and head downstairs. Wolfy's night pattern these days is to go to the pantry, where he wedges himself into a tight space that he can't back out of, and cries. In the process, he breaks things. He has removed the shelf from my kitchen cart, and a door from an old wardrobe. He's split open a 5-lb. bag of flour and a 10-lb. bag of rice. He upended my two aloe plants. All of this makes a lot of noise, but I've learned to wait until he cries. That's my signal to go down and help him out of whatever corner he's gotten himself into.

Often, we repeat the above several times. Last week I was sweeping rice off the pantry floor at 2:30 a.m. One night I tried sleeping on the sofa, but that seemed to upset him more. I'm guessing my presence on the sofa made him want to jump up and join me.

Have I mentioned that Wolfy is semi-incontinent? So is Angel. She's 16.

Angel is also strongly connected to Jill, who found her 16 years ago, hit (but not hurt) on a road. I thought the puppy was the Collie-Shepherd of my dreams, and named her Angel because I decided she'd been sent to see me through menopause. But she quickly lost her Collie-Shepherd look, and grew into a Briard. I had never heard of this breed until I ran across it in a book, and said, "Look! There's Angel!" She has the Briard personality (suspicious of strangers and highly protective of me) and memory (really excellent), but she must be a mix, though. Hybrid vigor would explain why Angel has lived far beyond most Briards.

She has a touch of arthritis, but nothing like Wolfy's. She's profoundly deaf, and her water intake and output would indicate that her kidney's aren't functioning all that well. She has started barking at night. For a while it was every night, but now it's only some nights. She also barks to wake me up in the morning, no matter what time I got to sleep the night before. She displays occasional signs of what they call "doggie dementia," but not to any great degree. At 16, in many ways she's not all that far removed from the puppy who rested her head on my arm the day we brought her home, and declared herself my dog.

She has, however, lost most of her house training. Sometimes I wonder how she feels about this. Both dogs have been in this state for quite some time. Years. At first I found it exhausting and stressful. Then I got used to living with plastic and paper on the floor all over the place. I learned to take the dogs out twice as often. I got into a routine with toilet paper, paper towels, wood floor cleaner, and daily mopping. I stopped inviting people over.

Now I seem to be in a third phase: I find it exhausting and stressful. I'm sure my sleep deprivation plays a role in this, but I am so weary of the drudgery.....and of smelling Dog Infirmary every time I walk into the house. It's spring, and my iris are in bloom. I want to invite people over to sit on my porch and have a drink. I want to be able to sleep the night through and come downstairs in the morning without wondering how much of a mess is waiting for me. I want my house back. I want my life back. But I don't want to forsake my dogs. Or lose them.

When Joe and I moved to the old farm 30+ years ago, we made it our mission to adopt as many animals as we could reasonable care for. At our peak we had five dogs and 12 cats at one time. (The 11 horses weren't adopted, so I didn't count those.) In all those years, I've never been without more than one dog and cat. There have been many "final decisions," and each of those decisions was horribly painful. Oddly, they seemed to get harder, not easier, with each animal.

Certainly I'm facing the hardest ones now. Not one animal, but two. And while an inner voice is saying (and at times screaming) "It's time," the fact is, my dogs aren't sick. Wolfy has night anxiety, true, but Angel loves her dinner, loves her walks. There is no misery to put them out of. The only misery is mine.

"You're not allowed to die," I told Wolfy, and I meant it. It seems inconceivable to me that I could even contemplate something so in violation of this heartfelt order. But sometimes I do. And then sometimes I don't.
Posted by Susan at 3:47 PM 15 comments: