I hope 2007 goes down as The Year of the Fall. If it does, that will mean that there were no falls, or certainly fewer of them, in subsequent years.

This year Linda fell on ice and broke her ankle so badly that she was ordered not to drive for six months. Jerry fell down a flight of steps at a theater and separated his shoulder. Jane fell down stairs in her house, breaking her leg in several places. Linda's husband and daughter are helping her, Jane is temporarily living in a rehab facility, and I drove Jerry around. I have to admit I wasn't all that gracious about it. Driving 25 miles on back roads to his house, and then to the city to his appointments (when did he develop such a long To Do list??), and then back to his house, and then back to my house, is tiring at best.

After a 90-minute wait at the orthopedist's one day (followed by the dry cleaners, the bank, his office, and Blockbuster) I got downright testy. Low blood sugar didn't help. But by the time I was fed and back in my coccoon I was ready to apologize. Because the thought had come to me rather emphatically: It could be you. I live out in the country, too, most of the time by myself. In addition, I have animals to care for: dogs in the house, cats in the house and barn. What if I got hurt?

And a few days later I did. I was walking one of the dogs early on St. Patrick's Day, after an 18" snowfall, when I fell twice on the icy plowed road — once on my knee and once on my hip. I thought I was in trouble when I came down hard on the hip in the middle of the road, but the knee turned out to be the bigger problem. I spent the next week mostly in bed watching Grey's Anatomy.

The animals got walked and fed because my son and daughter-in-law are living with me for a while. Otherwise, I don't know how I would have managed. I learned some time ago to say the words, "Can you please help?" But it's been a while and it might take some effort to force them past my throat. Even relying on my family to help me was no fun. Grey's Anatomy is a good show, but I would have been ever so much more excited and happy to be washing dishes, doing laundry, and manning the pooper scooper.

Remember that the next time you're plodding through routine chores. I will.
Posted by Susan at 6:52 AM 8 comments:

The Stars of the Snow

Snow again. It always seems unfair to get a snowstorm this close to spring (or thereafter), but what's fair about the weather? Not a thing.

It's piling up outside as I write this, with 12-16" in the forecast. It'll have to be dealt with in various ways, but for now there's nothing to do but look at it. We admire the way it has covered up vast areas of wicked, sucking mud. It can put is in denial about the mud, actually. The same mud that tortured us and our vehicles for the past week is seemingly gone now. As long as we can keep ourselves from anticipating The Big Melt, we don't have to think about the mud.

Along with the disappearance of the mud came the appearance of the birds. We always have birds here, but there's nothing like a foot of snow to turn the front yard into an open-air aviary. The birds are a show all by themselves, and to me and my camera the stars are the cardinals. Beautiful in any season, they take on a special glow against a white background. We never have more than one pair in our yard. Here's Mrs. Ms. Cardinal: 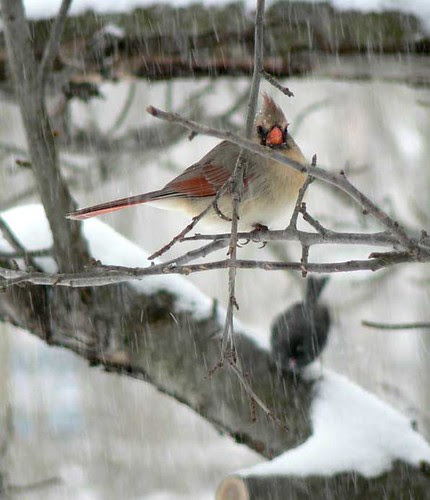 And here's her husband significant other, puffed up against the wind: 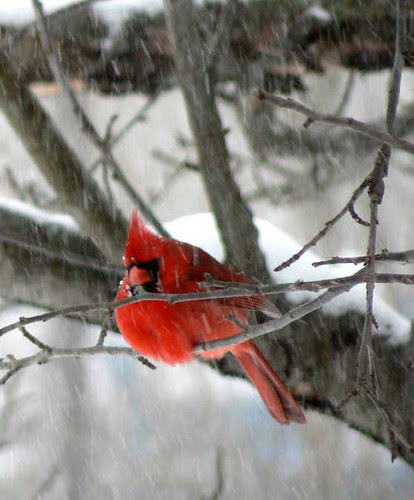 Another Time, Another Tune

I was fifteen, and in the happiest place I knew: Sag Harbor, Long Island, where my family spent a long vacation every summer. At Sag Harbor I lived in and on the water, went everywhere in our boat, and slept with sand in my bed every night. My dad and I caught something to eat every day: flounder, blue-claw crabs, clams we dug with our hands.

On this particular day our vacation was about to come to a close. My parents were at the cottage, packing to go home to the city. I was seated on a long white sofa in a spacious, glass-walled beach house, where I had been invited by several rather adorable guys. This was the fifties. I had no fear that the guys had brought me there to drop a date-rape drug into my Pepsi, or involve me in some satanic ritual. And I was right. We were there because they wanted me to hear some music they had recently discovered. The record was by The Kingston Trio, and I was enchanted.

It was my first exposure to what we called folk music. I've always loved harmony, plus the three guys on the album cover were so cute! I don't know what they look like now (hey, I'm not cute either), and I hardly ever hear their songs anymore, but when I do I still appreciate the harmonies. And "Scotch and Soda" always always takes me back to a time when I felt, rightly or wrongly, on the verge of something wonderful every day.
Posted by Susan at 6:35 AM 4 comments:

Patience is a Virtue

My grandmother always said that: "Patience is a virtue. Catch it if you can."

We were supposed to reroute pipes to make it possible for a new floor to be put in so that we could have the new dryer delivered and installed. The pipes got rerouted all right, but in such a way that it's no longer possible for the dryer to fit in that space. It looks like I won't be saying goodbye to the laundromat any time soon.

Hey, the laundromat isn't so bad. It seemed like such a nuisance at first, carting all those wet clothes in and out of the car, slipping around on the ice between the house and the garage and between the car and the side door of the laundromat, finding the change machine broken, trying to read while tuning out the true crime dramatizations always playing on the TV... you know, all that stuff. But now I'm used to it.

I'm writing this in a part of the house that used to be the kitchen. "Kitchen" is a bit of a stretch. It was a dark corner that housed a stove, a sink, and a board between them for the counter. When we first saw the house I took one look at the kitchen area and said, "I can't cook a meal there." Well, I ended up cooking three meals a day there for several years. It's amazing what you can get used to.

I wonder how long I'll be visiting the laundromat? Patience, patience...
Posted by Susan at 8:32 PM 4 comments: