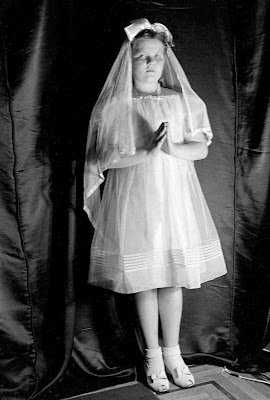 She was my first cousin, but so much older than I that I'm not even sure we ever met. I think we must have, and probably more than once, but I don't have a clear memory of it.

Would this be her First Communion picture? She looks too old, but it would explain the clothes. I'm not even sure what religion she was. Her grandmother was a Catholic convert, but only temporarily. Perhaps this took place during the Catholic phase.

I do know that her mother was a celebrated beauty, but unhappy—as celebrated beauties often are. And her father had money but little else. When I look at Barbara Joan's face in this picture, I wonder if she's looking into her future. She died when I was a child, of something that wasn't talked about. I have my suspicions, though. Let's just say if Roe v. Wade had taken place decades earlier, Barbara Joan might have lived past age 20.
Posted by Susan at 8:52 PM

(And this makes me want to celebrate that I'm not a celebrated beauty, what with your reminder of the oft reality...)