This is not a poem; it's just the easiest way for me to think tonight.

One car, four young people, two nights ago.
An on-ramp to the interstate. A sharp curve. A heavy foot on the accelerator.
"We're going too fast," a girl in the backseat said.
And then the hatchback, never built for speed, rolled. Rolled so hard and fast that it took down a highway light pole.
Two young men in the front seat, neither wearing a seat belt.
The driver was ejected through the windshield. He lives, paralyzed and still comatose.
The passenger, known for his moves on the football field and his good humor, ends up in the back seat.
Except there is no back seat. There is no car—just a flattened, inverted, compressed mass of mangled metal and glass. He was killed instantly.
A stranger, an angel, appears and calls 911.
Rescue crews arrive.
In what was once the back seat, the girls wore their seat belts. It takes 30 minutes to cut the first girl out of the car. She has a broken tibia and other, hopefully minor, injuries.
It takes more than two hours to extricate my granddaughter. She has two broken legs (femurs), four broken ribs, a shoulder injury, and many cuts and bruises.
An EMT said it was the worst accident he'd ever seen.

When Princess Diana died, someone wrote an essay I wish I'd saved. It was about women in vehicles driven by men, and how we seem to be hard-wired to relinquish control in that situation. It talked about how Diana, one of the most powerful women in the world, sat unbelted in the Mercedes that killed her, and how even though they traveled at seriously excessive speed, she never spoke up, never demanded that the driver slow down, never ordered him to stop. Do we trust men to take care of us? Is that it? Do we see automobiles as male territory, a place for us to recede into the background (literally)? 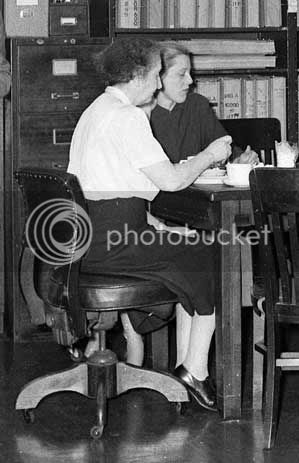 If you're on Facebook with me, you know that most mornings I post one of my dad's photos from the 1940s. Some of them were taken at various work-related functions. Today I scanned one of his negatives and and found a picture of Miss Cobb, the geologist who was so kind to me after my mother died (I was nine). She's the woman on the left, in sensible shoes. No fancy hair, no glamour, but a highly educated woman of great warmth.

I was first given Versed (Ver sed') years ago in New York, for an extremely painful GYN procedure for which the physician needed me to be awake. Versed doesn't relieve pain; it erases the memory of pain. I awoke to find my shins scraped and bleeding. I asked the doctor about it, and he said, "That's from when you tried to get away." I was left with nightmares in which I screamed curses. Versed erases the memory of pain, but only on a superficial level.

Versed is an incredibly popular drug among doctors and hospitals. It's not hard to see why......we can't complain about what we can't remember. They call it a sedative, and it does sedate some people. But it has quite the opposite effect on others. Although I hated what happened to me in that New York hospital, and had a deep distrust of the drug as a result, I was given it several times in the ensuing years for surgical procedures (they administer it prior to the anesthesia) and once for an endoscopy. I've known people (including my gastroenterologist) who underwent their endoscopies without medication. I asked one man what it was like, and he said, "Your experience was the same as mine. The only difference is you can't remember it."

I discovered there was a lot I couldn't remember. The older I got, the more Versed affected my short-term memory. It eventually came back, but it took longer each time. When I had minor surgery in January, I told the anesthesiologist I didn't need to be sedated before the anesthesia. He made a note on my chart and left. Seconds later, a nurse shot something into my IV. I asked her what it was, and she said "Versed."

Four months later, I was scheduled for two cataract operations. I was told I needed to be awake but immobilized for the surgery, so they would use Versed. We discussed this, and they said Versed was the only option. They would use the absolute smallest amount, and assured me it would not cause problems. I'm a proactive (read "annoying") patient, but in this case I didn't know of an alternative to the highly-recommended eye surgeon, and I thought they'd probably use much less Versed than I'd had previously.

I think they did use less, because I can remember both procedures. But in the week between them my memory was impaired, and after the second one it got dramatically worse. On the fifth day after the second surgery, I went to a party. The next day, I could remember the gist of a number of conversations, but not the people I spoke with. My word retrieval wasn't very good, and my thought retrieval was worse. And scarier.

That's not all that was scary. My mental state underwent a dramatic change. I became depressed in the morning and anxious at night. My heart would pound, and I had trouble breathing. This was not at all like me. It was terribly frightening. I wondered if it had anything to do with whatever tick-borne infection I've been fighting.

It lasted about a month, and then gradually improved and disappeared. I was doing the dishes one night when I remembered that some time back I'd seen "agitation" given as a possible side effect of Versed. I dried my hands and went to the computer. There I found every symptom I'd experienced during that awful month—all described by people telling Versed horror stories.

And these stories were truly horrifying. I got off easy, it turns out. Some people talked about side effects that never went away. One woman wrote about her husband, perfectly normal and well-grounded when he went to the hospital for minor surgery, now committed to a locked psych ward.

Ask A Patient has page after page of these stories. Other sites are dedicated to warning people about the dangers of Versed. Just Google Versed horror stories, Versed side effects, or Versedbusters and see what you get. There's a lot of first-person accounts out there, and I can only imagine how many others go unreported. If a side effect (especially this kind of side effect) occurs more than a week after a drug is given, a great many people will never make the connection.

I found several comments suggesting that many medical professionals won't allow the drug to be used on themselves. They're not the only ones. I will never allow it to be used on me again. Actually, I hope I can steer clear of all procedures, surgical and otherwise. I read of people being given Versed despite their orders to the contrary. Remembering that nurse shooting it into my IV, I believe it. Consider this to be my public service announcement. Maybe we need a catchy slogan. How about "Keep Versed Out of Your Head"?
Posted by Susan at 8:21 PM 42 comments: