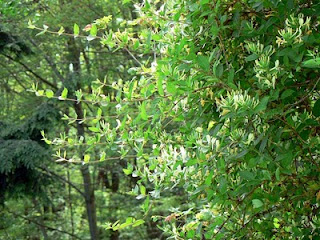 In the nine years that Gillian’s been gone, I’ve been blessed with many signs from her. In the beginning, especially, they were frequent and dramatic. I’m surprised I haven’t written more about them here. I didn’t take them for granted, exactly, but it’s only now that I fully realize the magnitude of the gifts I’ve been given. Jill, in spirit every bit as loving and creative as she was on this earth, has shown me miracles.

Most of the signs have involved animals or plants. In one of Dr. Michael Newton’s books (the second one, I think—Destiny of Souls) I read how some souls are taught how to create plant matter. It’s possible the book also contains information about souls’ communication through animals, but I may never get to that part. His books meant so much to me that so far I've left them unfinished.

One day in June, less than a month after Jill died, I was washing dishes at the kitchen window overlooking the backyard. Years earlier, I had ambitious plans for part of that yard. I’d planted a white rose, Sir Thomas Lipton, that was supposed to be the start of a garden. I got distracted with other things before designing the rest of it, and the garden never materialized. In fact, after my failed attempts to clear the area, most of it reverted to a wild tangle of blackberries and grape vines. Sir Thomas bloomed for a number of years before harsh winters took their toll. Eventually the rose bush died.

That June day I looked up from the dishes in the sink and saw a cloud of white at the far left side of the yard. Could it be the rose? Impossible! I dried my hands and walked slowly to the back door, afraid that if I went outside I’d find the rose bush as dead and bare as ever. But the white flowers were still there when I stepped out into the sun, and they were still there when I picked my way through the weeds to get closer.

The rose bush was covered in blooms, brilliant and fragrant. But another scent was even stronger. Blanketing the rose was honeysuckle. Thick, dense honeysuckle vines where none had grown before. Not ever, in the 25 years I’d lived here.

You have to understand that from the time we moved here, I knew the name of every plant that grew on this property, domestic or wild. Never had I seen honeysuckle. It’s not something I would have forgotten, either. Honeysuckle had special meaning for me.

My mother, raised in what was then rural New Jersey, longed for a garden. Floral abundance didn’t exist in New York City, where I grew up. We spoke of “a house in the country” the way people today talk about winning the lottery. It was our ultimate dream.

It’s hard to imagine nature walks along 32nd Avenue in Queens, but that’s how I think of the walks I took with my mom when I was little. In the shade under a railroad trestle, she found a wildflower—the tiniest thing, surely overlooked by everyone except a woman who was pulled as if by magnet to anything green and growing. She opened my eyes to the detail in ivy climbing on brick buildings. She revealed the heavy, sweet scent of the seemingly insignificant flowers that were part of the hedge around our apartment house. But the plant I associate most closely with my mother is honeysuckle.

We came upon it on our way to visit a friend one morning. I was probably around six years old. As we neared the end of a block of row houses with tiny fenced-in yards, my mother stopped abruptly.

“Oh!” she said. On one of the fences grew a vine that had spilled over the top. It was covered with clusters of pale, delicate, oddly-shaped flowers, their scent carrying to where we stood. My mom leaned in to inhale their perfume, touching her face to the thin, tubular flowers. I did the same.

“It’s honeysuckle,” she said softly. She gently separated a flower from its base and showed me how to suck the nectar from it.

A few years later she was gone, dying suddenly from breathing chlorinated hydrocarbons while cleaning a rug. And almost 50 years after that I was given the gift of roses and honeysuckle.

The rose never came back after that. In fact, the entire bush disappeared. But the honeysuckle has thrived. I just took the above picture. This spring the honeysuckle is so prolific that its scent is unmistakable 100 feet away, and around a corner of the house. Heady. Gorgeous. Strong. Miraculous.
Posted by Susan at 11:40 AM 8 comments:

Back when our children were young, my dear friend Lisa and I wrote frequent long letters to each other. We saved them, and once a year we mailed mailed them back. The result—in my case four file folders bulging with letters—is a diary of sorts. We did a smart thing, Lisa and I.

Of course, the letters don't always reflect smart things. Life, as we know, is a mix. The following is neither dumb nor smart, and it's not about child raising, marriage, or the endless weight loss/weight gain loop that was a continuing theme in my letters. It's about getting my first computer, which was the beautiful, ahead-of-its-time (but poorly marketed) Commodore Amiga. The Amiga had thousands of colors, but no hard drive. (My husband's first Dell, bought later, had a 40MB—yes, megabyte— hard drive and cost over $5,000). The disks I speak of were 3.5" floppies. Considering where we are today, I found my observations amusing, and thought you might, too. The letter is dated December 28, 1985.

I'm beginning to think I wasn't meant to get this computer. Naturally, I've been panting to use it ever since we opened it up Christmas morning. Joe put together the very nice computer desk Christmas night, and we were going to play with the machine the next day. I set about reading the (enormous) manual beforehand, and the first thing I found was an instruction to make a copy of every program disk before you use it, in case you manage to destroy it as it's running. In fact, the whole first part of the manual is full of warnings and cautions. It seems you can completely ruin your computer in any number of simple ways, such as turning it on within five seconds of turning it off (for real).

Anyway, I didn't have any blank disks on which to make copies, and of course they were unavailable locally, so I called a store and had them send me some (20 for $80.00 - on sale). Then I learned that the one piece of software I have in hand is copy protected; that is, I would not be able to copy it anyway. So I thought, great—we can get on with this and use the computer this weekend. Then I noticed that the package reads "joystick required." Nothing in my Amiga literature mentions a joystick, just a "mouse" (whatever that is).

So-o-o-o.......I called Sears and left a message to be given to Joe when he stopped there on the way home from New York: "Go to Weniger's and buy an Atari joystick." His reaction was, "My God—there's no getting away from her!"

He brought home the joystick and I thought we were finally All Set. Tonight I began the rather complex job of hooking up all the computer parts to each other, and I discovered two very discouraging things. One, an instruction that reads, "....you will have to buy a patch cord for this purpose," and the other the fact that Amiga mistakenly provided us with an extension cord instead of an audio cord with photo jacks. Eeeeek!! There seems to be no end to this, and I'm wondering if I should trade it in for a nice microwave. Actually, I could probably get eight microwaves for the price of this aggravating computer. Was it really properly named? I am going to start referring to the Amiga as the Mierda if this crap continues.
Posted by Susan at 3:19 PM 7 comments:

A Little Box of Tea

This morning I took down a small box of tea from the pantry shelf, and shook some of the black leaves into the metal mesh tea ball I use to steep loose tea. I made my tea and set aside the tea ball to use again tomorrow. That's not unusual at my house. What's unusual is that I've been keeping that little box of tea going for almost ten years.

My friend Gene brought me the tea when he came back from vacationing in Sri Lanka. Yes, this is a love story.

I love Kevin, too. Kevin and Gene and I worked together at a newspaper a decade ago when I was a reporter. Geno was the Layout Editor and Resident Photoshop Genius. When the Editor-in-Chief was on vacation and I was put in charge of the front page, Geno made it look as though I knew what I was doing. He kept me in Bob Dylan CDs. And he kept me laughing.

Kevin was the Sports Editor. He threw things at me. Oh, nothing that would give me a concussion or put my eye out. But like most of the sports-obsessed, Kevin regarded objects as things to score points with, usually by throwing. What he did for my reflexes was truly remarkable. Although my vision is poor and my peripheral vision outside my glasses just about nonexistent, I learned to snag things out of the air without turning my head or losing my place in the story I was typing.

Kevin kept me laughing, too. The level of banter in that office was incredible. We had the confidence and high spirits that comes from knowing we were all good at our jobs. In between one-liners, songs, visual gags, and long lunches together, we got an impressive amount of work done, and done well.

When my daughter Gillian died nine Memorial Days ago, I called Gene and he told Kevin. They both knew Jill. She had been in and out of the office; it was that kind of place. I forget how long I stayed home from work—three weeks, I think—but I remember thinking how different it would be when I went back. Gene and Kevin might interact the same as always, but I wouldn't be able to respond. I couldn't imagine myself laughing with them. I couldn't even imagine smiling.

My return was a blur. I can't tell you who said or did what, but I know my two favorite co-workers were wonderful. They were so careful with me, so sad for me, and at some point they realized, and helped me to realize, that while my loss was unimaginable, it hadn't stolen my sense of humor. As time went on, and my husband's condition grew worse, that office and those friends became a refuge for me, the banter (and yes, having things thrown at my head) a sanity saver.

They say you can't go home again, and I think that's often true. I left the newspaper to take care of my husband. Gene quit his job and moved away. He got married (I was there), and he and Stephanie are expecting a baby this year. Kevin still works for the paper, but the place has been remodeled and redecorated. The publisher has retired. Someone else sits at my old desk.

I still have their friendship, though. I see Kevin for lunch occasionally, and next month I'm going to Stephanie's baby shower. We have email, and we have Facebook. And I'm going to keep that little box of Sri Lankan tea going as long as I possibly can.
Posted by Susan at 3:16 PM 18 comments: