I spent a week in bed with the flu this month. Although it was my first flu experience in 15 years, I keep a collection of DVDs for just this purpose. I normally require at least a month to watch an entire movie (who wants to sit quietly for two hours?), but being sick is another story entirely. I went through several, little bits at a time. Unless you've been quite sick recently, you'd be surprised how much energy it takes to watch a movie, even a fluffy one.

I tried to watch The X Files Movie, but it stimulated my already overstimulated adrenals and I gave up after 10 or 15 minutes. Here's what I did watch:

To Catch a Thief. Cary Grant and Grace Kelly. God, they were gorgeous. Cary had such enormous appeal, and to think he did it without abs. That is, he probably had abs somewhere, but they were secondary to his voice, his manner, and that wonderful face. Who needs biceps when you have a chin like that? I saw this movie for the first time as a teenager, and understood it a lot better this time around. I also noticed Cary's butt this time. Nice.

Shall We Dance? This is the American version, starring Richard Gere, Susan Sarandon, and Jennifer Lopez. I'd forgotten that Lopez was a dancer before she became ThePhenomenonKnownAsJLo, but this movie reminded me. I'd like to see the Japanese original, too, which I heard was very good. I'd also like to look like that other Susan, Sarandon, once in a while. And to dance. To dance.

Maid in Manhattan. Another JLo movie. Cute, as was the kid who played her little boy. But it made me think, in a way the creators of the movie probably didn't have in mind. Two characters were attracted to the male star, whose name escapes me. (I wasn't attracted, can you tell?) One was a rich and jaded Brit; the other was JLo, a hotel maid living in humble, hard-working circumstances. In one scene, Lopez accompanies Male Star to the zoo, where they are entranced with the antics of the seals. It's clear that the rich and jaded bitch Brit could never be delighted with such simple entertainment. Watching it, I thought about people and money and stimulation and overstimulation, how quickly some people lose their ability to be delighted. Can't wear the $20 t-shirt anymore (not to mention the $7 one); gotta pay at least $300. Nice quality, plain leather purse? Hell, no! Gotta have the $6,000 designer model, the bigger the better. Everything big, everything fancy. Simple pleasures are for the simple-minded. That mindset is soooo repugnant to me. So as I watched the movie I hoped "Jennie from the block" was still able to enjoy the small things in life and find joy in nature. And then I remembered what I'd read a week or so earlier, about JLo's incredibly expensive nursery for her new twins, and the fact that the cost of their delivery (when you factor in her designer hospital gowns) broke all records. Ugh.

Prelude to a Kiss. This was the original version with Meg Ryan and Alec Baldwin. Boy, does Baldwin look young in this film! Meg never seems to change. She's always adorable, always wonderfully coiffed and dressed, and always seems like she has the potential to be a real pain in the ass. At least that's how she comes across to me. I liked this movie, which addresses fear—a constant in my life. Apparently (according to the movie) the way to rid yourself of fear is to have your body taken over by an elderly, terminally ill man. I don't think I'd attempt this cure without some sort of guarantee.

In Good Company. I loved this movie, despite the fact that Scarlett Johannsen's charactor showed all the personality of an eraser. It's about meaningful work. And thinking you know what you want, and trying to fit that mold. And ethics and morals. And overcoming hurt. If you don't think you could possibly care what happens to a Carrera 911 and its driver, give this movie a try. (I myself care what happens to all cars.)

Now I'm watching Season One of Hill Street Blues. My crush on Captain Furillo is alive and well. And I'm feeling a little better every day.
Posted by Susan at 6:20 AM 8 comments:

I used to be a hooker (of rugs) 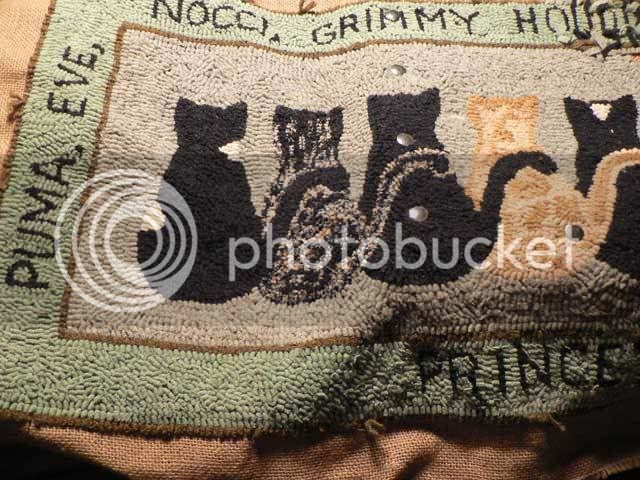 I used to do old-fashioned rug hooking, using strips cut from discarded wool clothes and hooking them into burlap. It was my winter hobby, and I loved it. I stopped a number of years ago when things got difficult at home, and I left a couple of projects unfinished. I got one of them out recently, a table runner I designed ten years ago. The seven cats we had at the time are pictured: Puma, Eve, Nocci, Grimmy, Houdini, Buddy, and Princeton. Today only Princeton is left.

I found evidence that moths have visited it, but I don't see any obvious damage. I hope they haven't weakened it badly. I'm thinking I should finish it. I know my daughter Jill would want me to. She enjoyed hooking, too, as well as the cats (and all animals!) and really liked this design. We thought it was fitting that the cats should be on a table runner because we were always chasing them off the table. 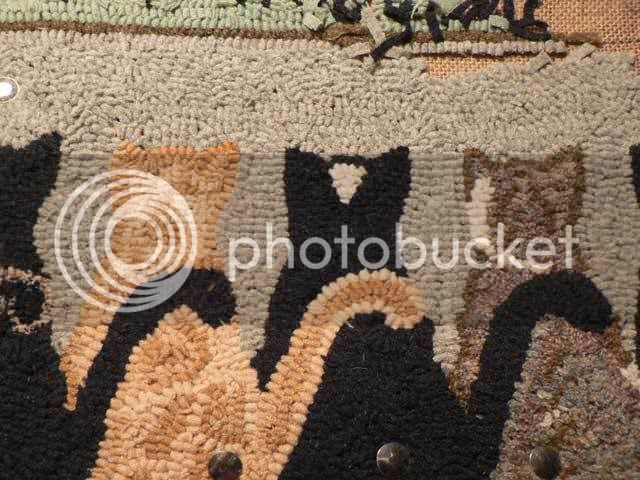 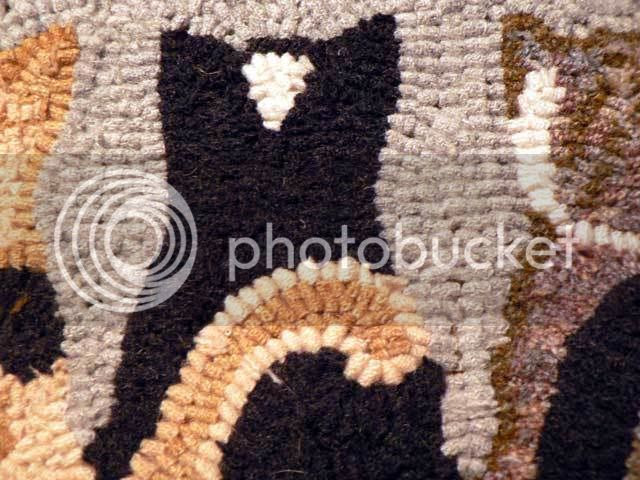 It's possible, maybe even likely, that my granddaughter might want to take up crossword puzzles at some point. Maybe she won't. But if her generation starts sharpening their pencils when they see the New York Times, Will Shortz and his disciples are going to have to get out their erasers and delete many of the old clues. They'll also have to add a bunch that reflect the current . . . um . . . culture.

I was working a puzzle last night, and thought about how, if I were doing the puzzle with Liz, she wouldn't, well, have a clue. At least for these:

Maybe I should invite Liz to do a puzzle with me. She'll think I'm smart, whereas in fact I'm only old.

She'll be sitting there, awestruck, while I zip through these:

No, wait. She'll be sitting there with her laptop, Googling. Feeding me the answers faster than I can write them in. Laughing triumphantly. Not to worry, Will Shortz.
Posted by Susan at 5:44 AM 9 comments: