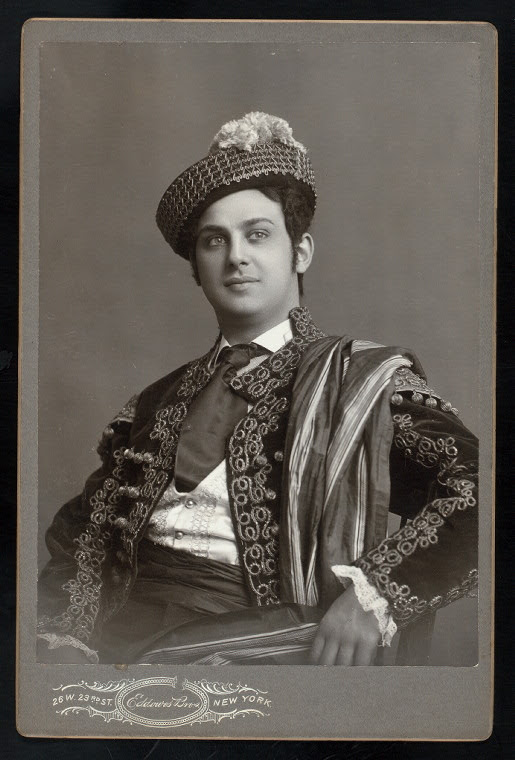 For about a week this month I was bitten hard by the genealogy bug. It's seductive—so much information on the Internet! In just a few days I traced one line back to 1790 in Germany. I was able to see (online) actual photographs of two of my great-great grandparents' gravestones, one written in Hebrew. I've stopped for now. To go any further would involve paying to join one of the genealogy websites, which I'm not ready to do at this point. I also don't want to spend a lot of time on it right now. But it's so much fun........kind of like a mystery you solve bit by bit.

PS: If you're wondering how we got from my grandfather's black hair to Jill's (and my) blonde, it's like this: The handsome Jewish baritone married the lovely blonde Scottish Presbyterian soprano. (They met on stage.) They had two children, a gorgeous daughter with his hair and a handsome son with hers. The handsome son was my dad.
Posted by Susan at 7:46 PM 6 comments:

The Boss of Bossa Nova

A diabetic octogenarian, Ira is in and out of the hospital. He insists his girlfriend dumped him because he asked the wrong question. Slim, barrel-chested, elegant in rolled-up sleeves and pleated pants, he says I’m his favorite bossa nova partner.

I found out last night that Ira died last week. I only knew him in one capacity--as my bossa nova dance partner of several years. I started going to the jazz club some years ago.......maybe 2002. Ira was one of the regulars. He was about 80 then, a handsome Jew who wore Italian clothes and danced beautifully. He always danced with his much-younger girlfriend. After a while my friends and I became regulars, too. Got to know the band very well and a bunch of the others. Ira's girlfriend was in a terrible car crash, and she moved away. It was a hard time for him.

I don't remember when I started dancing with Ira, but I became his favorite partner. He was a nice person, had a good heart and a sense of humor, and he was fun to dance with.

About a year ago he developed complications from diabetes and was hospitalized. I brought flowers, but didn't go up to see him. I just wanted him to know his friends from the jazz club were thinking of him. After the hospital. he went into a nursing home. It was posh, more like a resort. He called and invited me to come dance with him one day when a band was playing, and so I drove up with a friend. He was so proud to dance in front of all his new friends. I took pictures that evening and sent them to him.

Amazingly, a couple of the nurses drove Ira to the jazz club on ocasional Wednesdays. By then I had stopped going so regularly, so I didn't see him very much. He would call once in a while to see if I was going to be there. The answer was usually no. He told me he hoped I'd come even though the nurses had gotten angry with him for dancing with me! Weird. What was their agenda?

I was at the jazz club the week before this past Christmas when Ira showed up without the nurses, having gotten a ride from someone else. The band played his favorite "Girl From Ipanema" in his honor. He tried twice to dance with me, but couldn't stand up that long. He said he felt sick. Less than a month later, he was gone.

I had to read his obituary to find out if he had children. He didn't. It said he had once owned a nightclub. I could easily envision him there, working the room and dancing with all the ladies. It said he served in WWII and lost his brother in that war. It said over the years he lost two sisters. It left me wanting to know more.

Odd to have such limited knowledge of someone who was rather a fixture in my life for several years. Still, I miss him no less than I would if I'd known everything.
Posted by Susan at 7:29 AM 5 comments: