Update on that mama cat and her kittens

In June I wrote about the stray cat who gave birth to a litter of three kittens in my ice house. A lot has happened since then.

The neighbor who offered to help get the mama cat spayed hasn't been heard from since. As the kittens approached weaning age, I worried that the mother could become pregnant again at any time—and worried more when a large male cat began hanging around the property. The three kittens were orange, dark calico, and black (with a little white). I posted their pictures on Facebook, and also emailed other friends in hopes of finding good homes for them.

A friend saw the pictures, and asked me to save the orange kitten for his mother. Another friend forwarded the pictures to a friend of hers, who fell in love with the calico. I delivered the calico (now named Sugar) to her new owner, and took the others to the vet to have their genders revealed. (Yes, I still haven't learned to do this reliably.) We were surprised to learn the orange kitten was a female. (Most are male.) The black was a male.

My friend's mother decided she didn't want a female, and asked for the male. By this time I thought I'd be keeping the black one myself because they are hardest to place (black dogs, too). But now I was left with the orange—the smallest and bravest of the litter. I brought her into the house, and took her mother—by now named Bones . . . or Bonz . . . or Bonzy by my son and daughter-in-law—to be spayed. We couldn't risk the baby nursing or grooming her mother while the latter recovered from her surgery, so they hung out separately in the house.

When Bonzy recovered, I put her back outside and kept her supplied with food and water. She was furious with me for taking away her kittens. She was such a good mother, and I sympathized completely. I couldn't consider making her a house cat because she had so thoroughly alienated Annie the Mean, my adult calico. The two of them managed to be at war through the glass of the living room windows. Because Bonzy is such a fierce hunter, I figured she'd have plenty to amuse her outdoors. We recently installed a dog house on the porch in anticipation of the coming cold weather. I made a fleece bed for her, and will use something like this to keep her warm at night.

Meanwhile, I named the kitten Peachy and kept her sequestered in my bedroom until I had the time and energy to begin introducing her to Annie and Pogo. I knew the longer she stayed hidden, where they could get used to her smell, the better the introductions would go. And they've gone very well. Annie tries to avoid her for the most part, and Pogo still shows some signs of being jealous. But he actually plays with her now. Major progress!

Peachy is a smart, affectionate kitten with a great purr. She is slowly getting resigned to the fact that I won't let her nurse from my earlobes. I'd forgotten how unbelievably agile and fast kittens are! She makes me laugh every day. 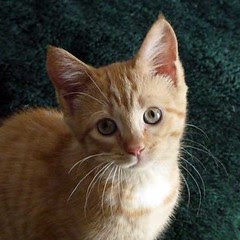 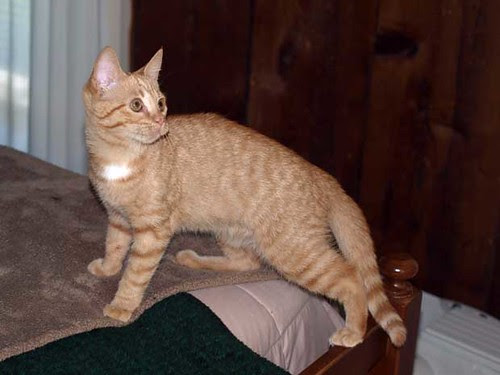 I just finished two weeks of working as a reporter/photographer for the newspaper I left nine years ago, filling in until a new reporter could be hired. The first week was exhausting, coming as it did on top of my granddaughter's accident and a period of daily trips to the hospital. But even tired as I was, I realized on some levels I was enjoying myself. By the second week, I was able to analyze why.

I felt competent. I'm a decent writer, a good newspaper photographer, and an ace at fielding calls from the crazy public. The staff made it clear that I saved the day by agreeing to come in for two weeks, and they were grateful. At home I save no one's day. At home I'm surrounded by jobs undone, and proof that I'm not a very good housekeeper. At the newspaper I met my daily deadlines and didn't need editing.

I had a field. One reason why I loved being a reporter years ago was that I could call myself one. Over the decades I've gotten paid for being a writer and an editor, but I've also gotten paid for being a secretary, a lab tech, a symphony telemarketer (that one didn't last long), and an administrator of census tests. Probably because I never graduated from college, I never felt as though I had a field. I always wanted one.

I experienced community. At a daily paper, we all strive toward a common goal. We're all in it together. I have sought community on one level or other my entire life. I'm convinced a feeling of community is one of the biggest benefits of belonging to a church. But I don't go to church. At home these days, most of my community is felt online. It was nice to experience it with audio.

And speaking of audio.....I had such fun bantering with my old friend Kevin and others on the staff. The newsroom gets quiet around four o'clock in the afternoon every day as everyone starts writing in earnest, but earlier in the day the atmosphere is light. Laughter is often triggered by our interaction with people outside the office. As I said to Kevin a few days ago, "So many funny things happen here, and we all share them. When I'm at home again next week, nothing funny is likely to happen—and if it does, I have no one to tell."

So now you're probably wondering why I didn't take the job myself. I was never seriously tempted. In addition to all of the above, the job also entails covering interminable night meetings, getting to work in all kinds of weather (the paper must get out no matter what), overtime on a regular basis, driving all over the countryside to get stories, and expending more energy than I possess. As a retired editor said to me recently, "Reporting is for the young."

The paper hired a young woman just out of college. I wish her the best. Now I have to figure out how to incorporate some of the above into my retirement. It was a good career while it lasted.
Posted by Susan at 5:55 PM 9 comments: