Come back at night. I've always liked the ideal climate proposed in Camelot, where it rains only between midnight and 8:00 a.m. Actually, I'd change it to 6:00 or 7:00 a.m. because this time of year I like to be out in the garden early in the morning.

The rain is coming down hard. It started yesterday morning, but it feels as though it's been pouring for days. I went to an engagement party yesterday. The hostess had a long tent set up outside, with tables and chairs underneath. Before I got there, the heavy rain collapsed the tent. So it was in indoor party—crowded, but nice. The porch was filled with open umbrellas in all colors.

The engaged couple are singers, and they sang "People Will Say We're in Love," from Oklahoma. For some reason that song is often in my head. I'll be vacuuming or whatever, and I'll just come out with it. I don't know why. Usually there's an obvious reason—almost always connected to the lyrics—why a song pops into my head. Even when it's not obvious, the process of figuring it out can be quite revealing and interesting. But this song? It makes no sense to me. Has someone stolen my hat and my glove? No. Is someone sighing and gazing at me? No. Am I gazing back? No. Are my eyes glowing? Hardly. Maybe the answer is something simple. Like maybe it's just in my key.
Posted by Susan at 6:05 AM No comments:

Slowing down, but not stagnating

New York City is under a "stagnation advisory" until 11:00 p.m. I don't know what that means, but it sounds most unpleasant. It has something to do with the weather. It's hot here in the country—90º as I write this—but as far as I can tell nothing is stagnating, not even me.

I got up earlier than I wanted to this morning in order to plant a rose (Sharifa Asma) before the sun got too high. Sharifa and the others I planted this week are covered with white laundry baskets from the dollar store to shade them from the hot sun. So far, at least, I haven't resorted to wearing one on my head.

Yesterday I planted two roses (Carefree Wonder and Distant Drums) in the early morning and then drove to town to get my hair cut. I think the style looks like Mariska Hargitay's, but maybe I'm overly optimistic. That's okay...overly optimistic is a nice change from I HATE MY HAIR, the most common reaction after visiting a salon. The only thing is, my bangs have disappeared. I don't know how she accomplished this; I know she didn't cut them off. But they don't seem to be there anymore. The bangs were the only part I liked about my last hair style. This is a little disconcerting.

Anyway, I came home, accomplished a modest amount in my cool (as in lower temperature) house, and around 6:00 p.m. went back outside to plant another rose (Scarlet Meidiland). By then the mosquitos had been alerted to my presence (salivating mosquitos are a sight to behold!), so one rose was my quota.

Henry Nevard, a lusciously-scented red rose, is supposed to arrive next week, and with it possibly Blanc Double de Coubert, a white rugosa I've admired ever since I read my first antique rose catalog, perhaps 35 years ago. Numbers like that are ever more meaningful to me as I drag myself around in this heat, feeling my age more than I ever have. I guess that figures, as I've never been this old before.

Two more Scarlet Meidilands are presently soaking in a bucket, awaiting their new homes in the ground. If all goes as planned, the three of them will grow beautifully and eventually cascade a bit over the stone wall of the terrace. Things rarely go as planned, but as I said before, optimism is good. 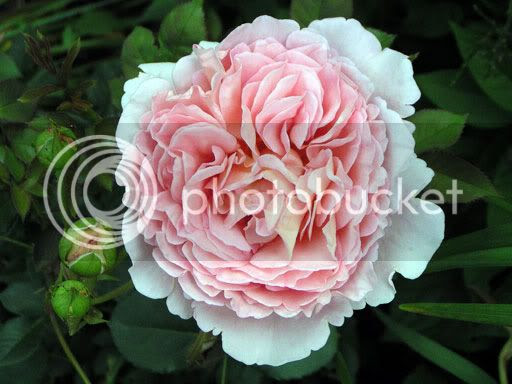