Woman's Best Friend (well, one of them, anyway) 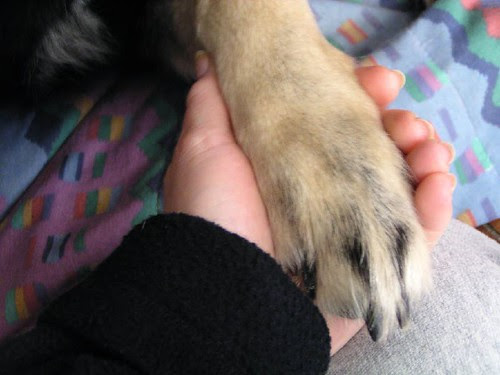 I took this picture over a year ago, symbolizing the bond Wolfy has with his family. This week he suffered an injury to that paw, and he's hobbling around and taking antibiotics. The vet had me replace his original bandage with one of my socks. So Wolfy's going through two or three socks per day . . . and a lot of surgical tape. Get well soon, Wolfy!!
Posted by Susan at 6:31 AM 5 comments: 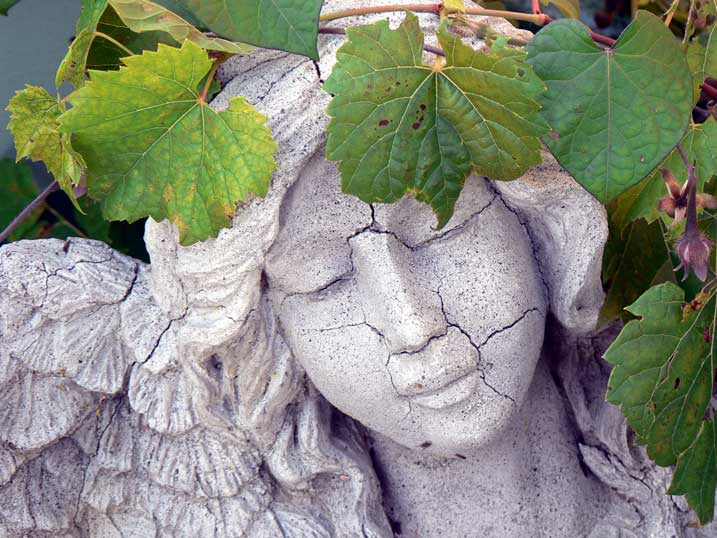 Gillian was the one most responsible for the expansion of our pet population. When a father up the road rejected the puppy given to him one Christmas, Jill brought it home. We named him Kismet. When an acquaintance allowed cats to breed and overrun her yard, Jill stole one. She slipped a gorgeous kitten into her jacket, and we named him El Niño. She spotted an unusual looking kitten at a horse barn: black, white, and fawn, with bandit markings around bright blue eyes. Remarkable purr. We named him Morgan and decided he needed a young companion. At the shelter, Jill chose an orange kitten with a lion face and a sweet personality, and named him Grimmy. A few years later, she went to the shelter to find the Golden Retriever of her dreams, and came home with a black husky-shepherd mix. She called him Wolfgang, after Mozart. But he was always called Wolfy.

Riding in a car driven by her best friend’s dad one day, she saw a puppy that had been hit on the road, stunned but unhurt. I said she was the collie-shepherd of my dreams, sent by God to see me through menopause. I named her Angel. She grew into a big dog with long grey hair. A Briard. Some years later Jill found a small black dog on our road. She named him Turpie, after a character in a favorite childhood book. When she spotted a very long-haired black kitten in a horse barn, she thought he might fill a hole left by the loss of my long-haired black-and-white, Mystic, who had drowned in our pool. Suzanne brought home the kitten, and I named him Princeton, for the place I was when he arrived: my late parents’ house in Florida.
Posted by Susan at 8:03 AM 3 comments: