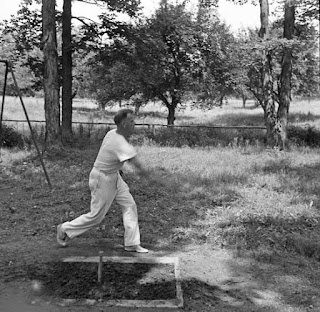 When I was a child we often vacationed with family friends and their boys. Boys were drawn to my dad, with his sense of humor and ability to get a game going at a moment's notice. The game could be anything—horseshoes, badminton, cards—but it usually involved a ball. We often played a game in which we threw a ball at the porch steps and scored base hits and home runs, but sometimes we just played catch.

Does anyone play catch anymore? Perhaps it's too simple for today's kids: A person throws a ball and another person catches it. On the surface, not much stimulation there. But there's fun (and a certain satisfaction) in a good throw or a good catch, and fun, too, in bad throws and crazy misses. Plus there's the interaction between the players. Catch always, it seems, involves banter—a narration of the undercurrent of competition that exists despite the lack of an official winner or loser.

I was thinking of this today as my son pulled garlic thinnings out of the soil and lobbed them to me over the garden fence. At first I couldn't seem to be able to catch any of them, and I wondered if I'd lost my hand-eye coordination (at this point, nothing would surprise me). But then I started snagging them out of the air (as my dad would have put it). We bantered. We laughed. He threw. I caught.

When we were done I went over to the outside faucet to rinse the garlic bulbs off. My son called to me that he had one more. It was a long throw, and when I caught it between two fingers I yelled "Yay!" How many opportunities do we get to yell "Yay!" in an average day? People really ought to play more catch.

I don't remember playing catch as a kid but we did play croquet on my grandparent's lawn. I probably liked it because I had less chance of getting beaned on the head by a missed ball :)

LOL Did you get beaned on the head a lot, Crystal? I liked croquet, too, although I don't recall being particularly good at it. Getting beaned by a croquet ball would be painful!

I did get beaned. I think my vision was already starting to go, or at least that's my excuse :)

See? It even works when you read about it.

Maybe if I played catch with garlic I'd finally get into it....

That could do it. Or chocolate, maybe.

Jen, I didn't know about apples. Is that for certain? I'll have to look into it, although I can tell you I don't react to apples the way I do to solanine-containing foods. I eat a lot of apples, cooked and raw--we have many apple trees on the property. It's possible they increase my arthritis pain; I have no idea. Thanks for the heads-up.