Another Three Days at Yale 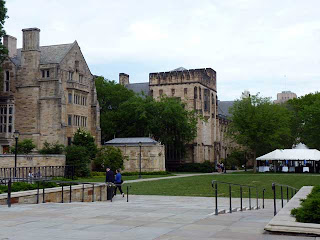 Five years after my first attendance at my late husband's class reunion, I returned to Yale this past weekend for their 60th. This time I'd looked forward to doing the whole four days, but after two weeks of bronchitis I decided to drive up on Friday instead of Thursday, giving myself another day for my cough to subside and for me to get more rest. I wanted to be able to dance, eat, talk, and traipse all over Yale, just like last time. And I did. I had a wonderful weekend.

When I was in First Grade, our class took a walk. I don't imagine we walked very far—maybe around the large Queens block—but a permission slip was required. My mother signed the slip and sent it back to school with me that morning, but when it came time to hand it to the teacher I was too shy to stand and walk to the front of the classroom. So I stayed in my seat and didn't go on the walk.

I thought about this Saturday night as I sipped a good malbec under a huge tent in the middle of Berkeley College at Yale. At one end of the long tent, a trio played music for dancing, and couples took advantage on the raised floor alongside the musicians. At the other end, three aproned students cheerfully tended the open bar. In the middle, hundreds of happy reunioners sat at white-clothed tables or walked about, table-hopping. Every one of them wore a smile.

I smiled too. I knew the wine and the lobster dinner I'd consumed weren't entirely responsible for my feeling of well being; most of the credit went to the people at those tables and on the dance floor. Joe's classmates and their wives have been very kind to me. I met quite a few five years ago, and many more this time. And this is where my thought about shyness comes in.

It occurred to me that if I'd been shy I would have missed out on meeting so many of them. Here's an example: I arrived at the class dinner Friday night with a couple of fellow widows. By the time we'd gotten drinks at the bar, most of the tables had filled up. We found space with some other people at a table on the end, in the path of a breeze. Rain was approaching, and the temperature was dropping. My friends were wearing jackets and blazers; I was wearing a lacy 3/4-sleeve cardigan. I would have been freezing at that table. I told my friends I was going to throw myself on the mercy of strangers, and I set out to find a table with an empty chair. It took me longer than expected, but the reward at the end of my search was an excellent dinner partner I never would have met otherwise. Our conversation ranged from saguaros to sudden loss, and it was one I'll remember. I'm glad I didn't miss out.

The married gentlemen of the Class of '52 are true gentlemen, not inclined to ask a single woman to dance. But being the gentlemen they are, they won't turn a woman down if she asks. I proved this theory Saturday night with a lindy, a foxtrot, and a rhumba (and expressed my gratitude to their wives).

I met some of the nicest people just by asking if I could follow them to an event. No one turned me down, and we had some good conversations as we strolled past Yale's beautiful stone buildings.

At the class dinner one of the speakers mentioned that they'd need reunion photos for their website. I brought a camera, and figured this is the least I could do for the class that had invited me to share their event and paid my way. So on the last night I became the self-appointed "official" photographer. Another widow offered to be my "assistant." She followed me around, writing down names as I snapped pictures. We got to meet a lot of people this way.

So now I'm back home in my old farmhouse on a sparsely-populated dirt road, grateful that the first-grader paralyzed by shyness managed to grow into a pushy old broad. I'm thinking this is a quality I should be able to use more often than once every five years. Beyond the perimeter of my acreage are people—people who write, people who garden, people who enjoy laughing, games, music, and the company of other people. Singers. Scientists. People who know how to do things I never heard of. I think it's time to plan how I might meet some of them.

I admire you greatly! And I'm so glad you had a great time...

I remember your last post about this. I've never been to any kind of event like this - it sounds glamorous. Really admire your courage and willingness to hope for and expect the best in others. I'm still shy.

Thanks, IB and Crystal! I wouldn't call it glamorous, exactly. Upscale and down-to-earth, maybe. The food was definitely upscale; most of the people were down-to-earth. The setting--that wonderful stone architecture--was more than a little magical.

Oh I love this - your conviction to get out there, and not to be shy. I'm a little in awe of you.

Thanks, Mali. I still feel intimidated in hair salons though.