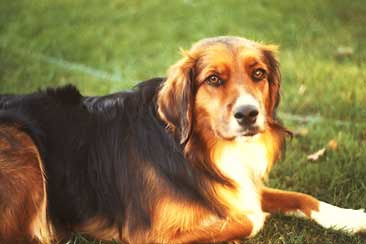 I will always think of Poppy as The First Dog. My husband and I found her in Pennsylvania in 1968. We were living in midtown Manhattan and had just bought a weekend house in the country. Our first visitors were Shep, a handsome black collie-shepherd belonging to someone down the road, and his mate, a stray called Puppy. When Puppy had puppies, we took them to the shelter (where they assured us the pups were supremely adoptable) and adopted her and changed her name to Poppy. What a shock it must have been for a country dog to find herself in the concrete canyons of New York City!

She adapted well, though (other than chewing a big hole in the arm of our new sofa). She occasionally accompanied me to work at Lincoln Center, where she became the mascot of the Philharmonic's softball team. Later she moved with us to suburban New Jersey, and again to rural PA. She flew down to Florida with me many times to visit my parents. Poppy was a thoroughly nice dog who paved the way for many more dogs.
Posted by Susan at 5:52 AM

I think of my first dog as Tony, a collie-german shepherd mix we adopted in Bermuda when I was a kid and brought back here when we moved back. A great friend.

She is a beauty. Are there any dogs in the picture now Susan?

No dogs in the picture now. The main stumbling block is an inability to walk a dog in winter. Our road ices over, and I'm unwilling to risk another fall. Also, my Raynaud's limits outdoor time in the cold. Another factor is money, unfortunately. There was a time when we could afford to have all the dogs, cats, and horses we wanted. But times have changed, and three cats are enough of an expense for me right now.

I do, however, have a dog connection. Every few weeks I bring containers of frozen "dog food" (my chicken scraps and healthy leftovers) to the animal shelter.

I think you're my soulmate Susan :).