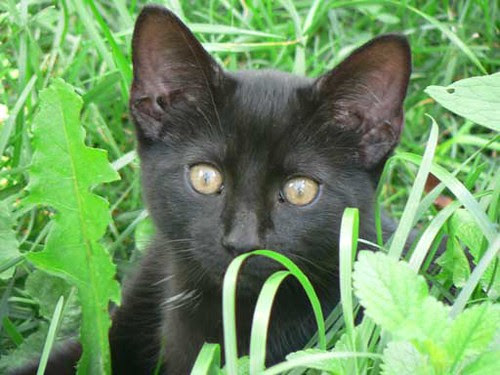 Pogo is Annie's black kitten. He had two orange siblings, and when we met them all three were terrified of humans. Leanne and I went next door on a regular basis to play with them, justifying it by saying we were socializing the feral kittens. This is true, of course, but we also simply found them irresistible.
They didn't socialize easy, and the process wasn't helped along when a neighborhood boy went after them with a stick. That evening, Annie moved her brood into my garage. They were all still living there when Annie became sick. The vet found several things wrong with her, and said she was in a weakened condition from nursing the kittens too long. This offended my La Leche League Leader sensibilities, but I agreed to facilitate weaning. Annie had to come into my home in order to rest and get her daily meds, and I brought her black kitten with her. I took the oranges (males? females?) to the shelter, something I'd never done before. But the staff said the kittens would probably get adopted quickly because orange kittens were popular and they were the only ones of that color. I want to believe that's what happened.
I hadn't intended to acquire two new cats, but I knew I was fated to hold on to the black kitten. What is it with me and black cats?? (More about that another time.) Annie spent a month in the guest room with her baby. During that time he overcame all his fears and demonstrated a great capacity for affection, a strong purr, and the ability to levitate in all directions. I named him Pogo.
This is Pogo's first winter. He and Annie are indoors most of the time, but he loves to go out to play in the snow if it's not too cold. Unlike his mother, he gets along well with the dogs and the other cats. He loves all the humans. At night he sleeps in Joey and Leanne's room. And sometimes he joins them for breakfast, sitting in a chair at the head of the table and looking hopeful.
Posted by Susan at 12:46 PM

Grendel nursed her kittens a long time. Sometimes Data would try to nurse with her, even as an adult. Kermit still does that nursing-kneading thing with her hands when i pet her :-)