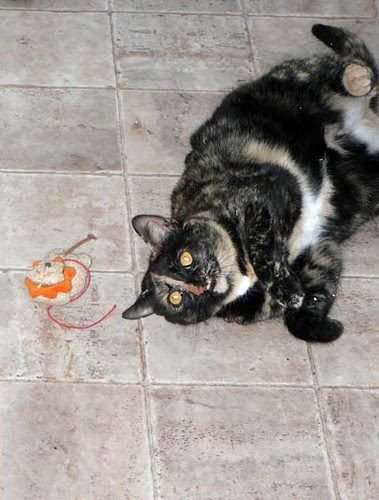 I was sweeping about 10" of snow off my car last winter when I discovered--because the mound of snow at my feet began to move--that I'd been sweeping it onto a calico cat. She was unfazed by the avalanche; she she got out from under, shook herself off, and proceeded to rub around my ankles--or, more accurately, my boots.
She came around a lot after that. I learned that the woman managing the horse farm next door had acquired her, along with several others, to keep the barns free of mice. When this woman quit her job, leaving the cats behind, I decided to adopt my calico friend and get her spayed. A friend suggested that I name her Little Orphan Annie, which suited her perfectly. Those big yellow eyes! I invited her to spend the night in my house, and she readily agreed.
It was a peaceful sleepover, but in the morning I discovered that I was harboring a nursing mother. Back to the barn went Annie. Several days later Leanne and I found the kittens: two orange and one black. Thus began a period of waiting for the kittens to be old enough to be weaned so that Annie could be spayed. It dragged out quite a bit, involving medicating Annie every day for a month after it was discovered that she had elevated liver enzymes and couldn't undergo surgery until she was healthy.
Annie got spayed, moved in, and never looked back at the barn next door. She's a somewhat moody cat, affectionate one day, aloof the next. But one constant is her pleasure at finding warm, soft places to sleep. Annie loves to sleep. She also loves catnip, as you can see from this photo. And she loves her name. That is, she answers to it instantly, as well as to my all-purpose cat call: pssst!
Imagine...an animal story with a happy ending. Little Orphan Annie is an orphan no more.
Posted by Susan at 7:44 PM

So what's up with Pogo?

RYC: I worried about posting it.

JHK: Not to worry! I just thought you were brave to write that.