Something More Cheerful for the New Year

Last year for Christmas I decided to make aprons for my daughter and her family. I would use printed fabric for her and her daughter, and matching denim ones for her husband and his two daughters. I had a lot of enthusiasm for the project until I saw what denim is selling for these days. So that was last year, and after the project hit a couple more snags, the aprons never got made.

This year someone posed a question at one of my online hangouts, asking if anyone was making Christmas gifts. One of the responders posted a link to instructions for making aprons out of men's shirts. She posted two links, actually—the first, where the idea seemed to originate, was a Russian website. The second was a blog where someone was kind enough to take step-by-step photos of the process.

Off to the Salvation Army I went, where the shirts cost me $2.50 to $3 apiece. I ended up buying more than five because it took awhile to find one long enough for Chuck (I'm still not certain I did). One of the ones I bought for his apron and rejected after I cut it was a 100% Irish linen shirt from Banana Republic, the back of which is now serving as a wrap for Bonesy-the-outside-cat's heating disk.

The process is simple: You cut off the back and the sleeves, leaving the double-seams on the front so those edges don't have to be hemmed. (Most dress shirts—excluding the linen one—are so tightly woven that you can cut right up to the seam without worrying about unraveling.) Then you cut diagonally from the collar to the underarm, leaving a bit of the shoulder. This bit of shoulder will disappear once you turn it under, twice, to hem the diagonal cut.

Then all you have to do is cut ties, using the length of the back. I added a patch pocket to each, using fabric from the other apron backs. It would be a nice idea to cut the ties on the bias, but I didn't do that. I've since seen instructions that have you sew bias binding around the entire edge of the apron, but I didn't do that either. I am far from skilled as a sewer, and kept these as simple as possible.

Everyone seemed to like their aprons, and I thought it was a good sign that no one realized I'd made them until I said so. I knew they were a hit when my son asked, "Where's mine?"

Here's the one I made for my daughter. The pocket is made from her daughter's green striped apron fabric. 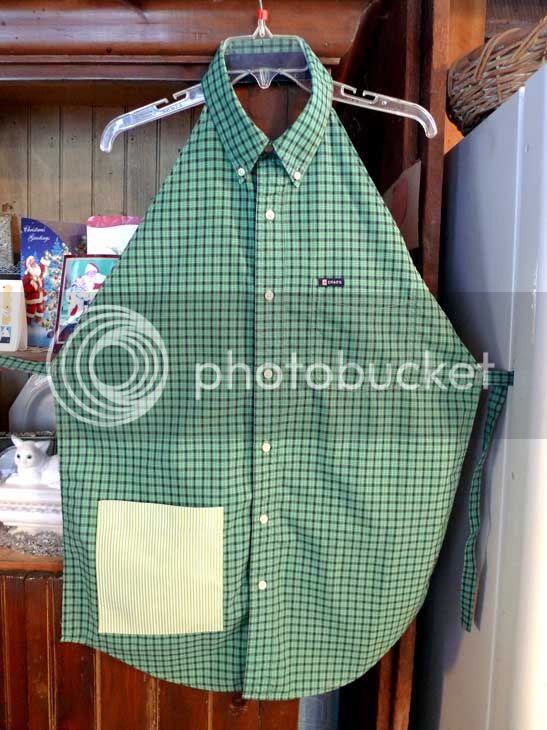 Wow! I tried to picture how this would look and was completely wrong in my mind. Very cool.

My description must have been way off! :-)

Here are the instructions I used, for anyone who would like to make one. Or five.

Terrific! You could start a business...

What a great idea! Sorry I missed it pre-Christmas.