Asleep in the Snow 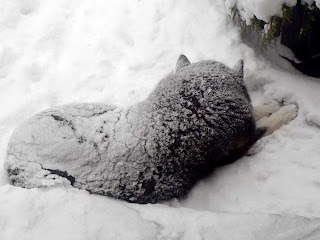 This looks cruel, but really, it isn't. The vet explained Wolfy's reluctance to come indoors: "He's a Husky." Yes, Huskies like the cold. But I also think the snow cools his inflamed hips better than his pricey medications. I managed to get him inside after I took this picture because his coat was starting to ice up.

Suffice it to say Wolfy doesn't appreciate the woodstove nearly as much as I do.
Posted by Susan at 2:22 PM

He looks comfortable enough in the snow -- I can imagine feels good on his hips.

Dara the rottweiler loved snow. Bleys the norwegian forest cat revels in it as well, as long as he can come back in...

Neat photo. How is he doing?

He's back out in the snow as I write this. We got about 25" over the past two days.

Aside from his hips, he's doing great. But the hips are a serious problem. The vet switched his meds, and he started on the new one two days ago. We'll see if this helps.

I use to have Husky's. One time when their swimming pool ice up, they would lay on it.

I can understand him not liking that stove with all that fur.

Thanks, guys! It's funny . . . earlier in the winter I spoke to the vet, expressing my concern that Wolfy was doing a lot of panting. I thought he might be in pain. "Maybe your house is too hot," she said.

When you hear hoofbeats, look for a horse, not a zebra. She's a good vet.

Where temperature is concerned, my dogs are bipolar: they love the cold and snow, and they love to roast themselves near the stove.

What a wonderful photo.