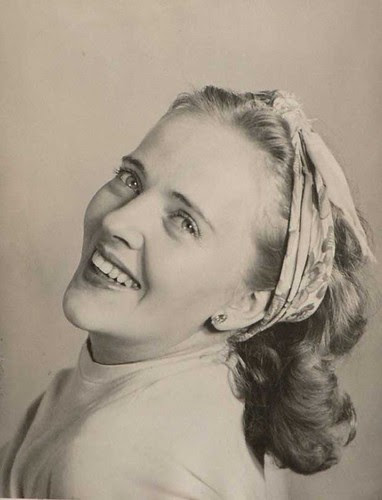 It's not Mother's Day, but surely we think about our mothers more than once a year. I started thinking about mine this morning, and I haven't stopped.

My mom's name was Dorothy, but everybody called her Dotty. She was raised in what was then rural New Jersey, and always wanted to live in the country again. She and my dad were living in Greenwich Village when I was conceived, and then in an apartment in Queens near a tennis court. They were both excellent tennis players, but she was brilliant on the court.

She was brilliant off the court, too. People always spoke of her beauty, intelligence, artistic talent, and sense of fun. Oh, and her athleticism. She was only 5'3" and didn't look like an athlete, but she had perfect hand-eye coordination. My dad loved to wander into a softball game where they weren't known. The guys would be dismayed to find this young woman in their midst, my dad insisting they both wanted to join the game. The guys would stick her somewhere on the edges of the outfield—where she'd wow them by snagging every ball and throwing it home.

She had wanted to study art, but her parents asked her to make the sacrifice and go to work in an office in order to put her younger sister through nursing school. Later, as a self-taught artist, she worked briefly for Walt Disney, drawing panels for animation.

She made most of my clothes and also made me laugh. She was wonderfully funny, although I remember a time when the school administration didn't think so. The Mother's Club was putting on a variety show, and my mom had done all the posters and set design. She put together a "musical" act with several of her friends, all dressed as men in black baggy suits. They would "play" various fake instruments, a very serious bunch playing very serious music — until my mother's fly opened and a giant spider fell out. The school officials were not amused, and wouldn't let her do it.

She had a way of making everyone her friend. The old Chinese couple who lived down the block in an ancient, peeling house with a tangle of strange vegetation in back called her "Madame 3E" after our apartment number. They loved her. Today, I can easily imagine how enchanted she must have been with their exotic garden.

She took me on walks and pointed out the tiniest wildflowers growing in the grime under a railroad trestle. She showed me how to suck nectar out of honeysuckle. She moistened lentils held with cotton against the inside of a jar in the dark of my bedroom closet to show me how seeds sprout.

She loved being a mother, and wanted another baby. But she had a miscarriage when I was two, and another about six years later. A month after turning 38, she cleaned a rug one Saturday evening. She used a rug cleaner containing chlorinated hydrocarbons; they don't sell that stuff anymore. It was November, and the windows were closed. The next morning she woke early, became sick in the bathroom, collapsed, and died.

She was friends with just about everyone in our apartment building. No one could believe the news. I heard over and over, "Not Dotty!"

I was so young, but I wish I'd known to look for signs from her. I have no doubt she gave me many.
Posted by Susan at 12:18 PM

Susan, what a lovely tribute to your mom. Now I see where you get your beauty and your cool (born in Greenwich village :-).

Thanks, Crystal! I was born in Manhattan General Hospital. Not sure exactly where that is. Maybe it is the Village!

Oh, I don't even know how to comment on this. It was so beautiful (in terms of the subject matter and also the wording, like when you're describing the Chinese couple's abode) and so horrible. You sound like you've had way too many sudden deaths in your life. I'm not sure how satisfying an e-hug is, but I'm giving you one. Right now.

Oh, so long since I've checked in here. What a beautiful piece. And then the shock... It feels as if you've mirrored in the form the way it was lived. Lots of love, laughter, then so very suddenly snatched away...

Wow. How old were you when she died?

Hi, IB. So nice to see you here. I was nine when my mom died. It was the defining moment of my life until...

Yes, I've thought about that mirror.