A few weeks ago I made an appointment to have Angel put to sleep. Making that call to the vet was devastating. I kept second-guessing myself, as I wasn't at all sure it was Angel's time. I asked Jill for a sign, and I got one: Leaving the house to keep the appointment, I walked down the porch steps--and Angel jumped off them in one leap. We turned around and went back in the house, and I canceled the appointment.

Then suddenly this past week--although in reality it's been a long process, and not sudden at all--I knew it was time. I have wanted so badly to be 100% sure Angel's quality of life was diminishing, and when she fell a couple of times this weekend, and turned for home in the middle of our walks, I was convinced. When I called the vet to make the appointment this morning, there was no second-guessing.

I told the vet Angel was a tough dog--unusual for a dog her size, especially a Briard, to live to be 16--and she proved me right. It took three shots instead of the usual one to put her down. It wasn't terrible, though, because she was heavily sedated and not conscious at that point.

I may have told the story before of how I got Angel, but I'll tell it again because I love it. My daughter Jill was a teenager, going somewhere with her best friend and her friend's father. They passed a puppy who had that frantic look of a dog that had been abandoned on the road. Coming by again later, Jill spotted the puppy sprawled on the ground. She had been hit, but not injured.

Since this was in the days before cell phones, Jill knocked on a door and asked the homeowner if she could use her phone to call her mother. The woman said she could use the phone, but added, "You mother isn't going to want to come pick up a dog." Jill said, "You don't know my mother." Like I said, I love this story.

My husband drove us to get the puppy, and on the way home she rested her beautiful head on my arm. From that moment, I knew she was my dog. But right now Jill is taking care of her again until I get there.
Posted by Susan at 10:35 PM 10 comments: 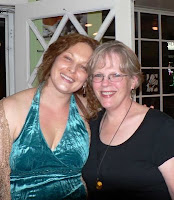 It occurred to me that they must hear this sort of thing a lot. I'll have to think up something more convincing for the next time. We're planning another poetry reading in the park in August. Maybe we should advertise it as "Poetry, Music, and Really Bad-Tasting, Potentially Hazardous Food." Or, better yet, "An Evening of Culture for Fasters: Poetry, Music, and No Food or Drink Whatsoever."
Posted by Susan at 5:07 AM 10 comments:

The Egg and I

(Does anyone remember that wonderful old book?)

I found several tiny (1/8" inch), perfectly round eggs on top of several small pots in which I had started seeds outdoors. At first I thought they were part of the potting mix--vermiculite or something like that. Then, because I've been battling so many destructive insects this summer, I squished a few. Then I had an attack of conscience: What if it was a spider egg? Or a beneficial insect? Or something CUTE?

I asked around, and went looking on the Internet. So far I *think* it's a snail egg. This would make sense because those pots were kept wet at all times. Snails are neither beneficial nor cute. They are also not spiders. So I feel better, at least for now. I'll keep watch and see what develops with the egg.

Of course, by the time something hatches from it, my maternal instinct will have kicked in and I'll be suffused with prolactin. Should a snail emerge from the egg, I will have no choice but to issue a whispered warning about the slug bait I have scattered all over the place. And the oat bran. And the soles of my feet, which tend to seek out slugs on the stone path.
Posted by Susan at 4:31 PM 7 comments: On Saturday I drove up to New York State to be with my cousin Terry's husband and one of their daughters on garden tour day. Terry's beautiful garden, called "Terry's Passion," was featured on the tour, and people came by all afternoon. I took lots of pictures. Terry's flower beds, and Dave's wonderful vegetable and herb gardens are just a delightful place to be.

I can't say it was a bittersweet experience. It was just sweet.

If you'd like to see more pictures of Terry's beautiful gardens, you can find them here. Just click on any to enlarge, and to make them bigger still, click on All Sizes at the top of the picture.
Posted by Susan at 2:39 PM 3 comments:

My granddaughter took this picture of Chuck last night—with her phone! (Can someone tell me why Blogspot is now cutting off a third of horizontal [landscape] photos, turning them into vertical [portrait mode]?)
Posted by Susan at 4:50 PM 8 comments: